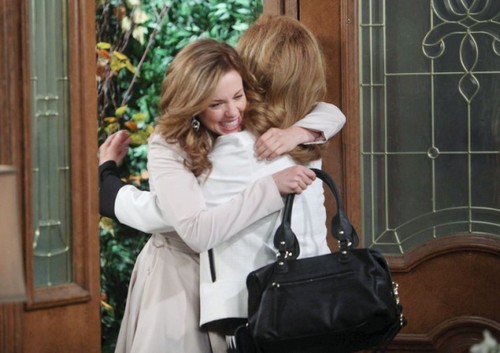 Days of Our Lives spoilers tease that the Holiday week of November 24 will be full of fun drama and DOOL fans won’t want to miss a single episode of the NBC soap. Melanie Jonas’s arrival in Salem continues to throw characters for a loop, and some Salem relationships start to heat up – while others start to fizzle out.

Monday November 24: Days of Our Lives spoilers tease that on Monday’s episode of the NBC soap, Melanie Jonas meets up with Maggie Horton to catch up – and it becomes increasingly clear that Melanie is trying to hide a pretty big secret. Rumor has it she committed a major crime in Europe and is on the run from law officials. Meanwhile, Melanie’s father Daniel has a secret of his own – his new found attraction to Nicole and judging by the sparks that will fly on November 24, it is safe to assume Nicole feels the same way.

Tuesday November 25: Spoilers tease that on Tuesday’s episode of Days of Our Lives, Melanie learns that a lot has changed since she left Salem and she confronts Nicole and demands to know why she is running around Daniel’s apartment in nothing but a towel. Awkward! Speaking of Awkward, across town Clyde heads to his first therapy session with Marlena – it will be interesting to hear him spill his deep dark secrets.

Wednesday November 26: On the November 26th episode of Days of Our Lives, MIA Will’s hubby Sonny reportedly is in for a major shock – although we have no idea what that is. Also on DOOL fans can expect to see a heated scene between Melanie and Chad on Wednesday, according to Soap Opera Digest – “Melanie sets things straight with Chad.”

Thursday November 27: Happy Thanksgiving! Days of Our Lives will not air on NBC.

Friday November 28: Days of Our Lives will not air on NBC.

So Days fans, how do you think Molly Burnett is doing as Melanie Jonas? Are you happy to have her back, or could you do without her? How do you feel about Nicole and Daniel hooking up? What major shock do you think Sonny receives? Are you intrigued by Marlena and Clyde’s therapy sessions? Let us know what you think in the comments below and don’t forget to check CDL tomorrow for more Days of Our Lives spoilers.