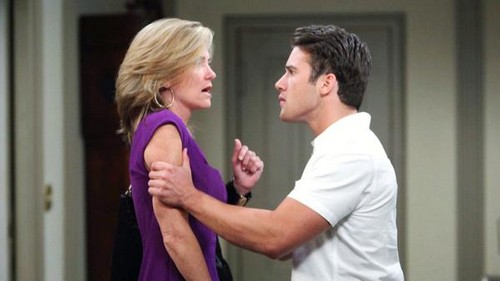 Days of Our Lives spoilers tease a ton of drama on the NBC soap this month, and some pretty crazy DOOL rumors are floating around the Internet right now. Days of Our Lives rumors have a tendency of morphing in to actual spoilers – so we always like to keep our eyes and ears open. Here are some of our favorite Days rumors that are currently making their rounds, some of the rumors we really hope come true, and others we hope are nothing more than just rumors.

EJ DiMera Back From The Dead: When TPTB confirmed spoilers Alison Sweeney was exiting Days of Our Lives, they made it very clear that they would not be recasting Sami Brady and would leave the door open for Sweeney to return, however they said nothing about a James Scott recast. On top of the fact that the soap will not confirm or deny they are recasting the role of EJ DiMera, his death was rather suspicious, and the mysterious syringe that Kristen injected in to EJ’s dead body has fueled rumors that the character will be returning from the dead.

Sonny Cheats On Will With Paul Norita: Since Christopher Sean’s new character Paul Norita debuted on Days of Our Lives, he has been flirting with any woman with a pulse in Salem, but rumor has it Paul is just overcompensating and trying to hide that he is really gay! DOOL rumors tease that while Sonny is in California, Will might cheat on him with Paul!

Kristen DiMera Has Twins: Eileen Davidson’s character Kristen DiMera just left Salem with a bang, and took Theresa and Brady’s embryo with her, tucked safely inside her own uterus. Days of Our Lives spoilers have already confirmed that DiMera will be returning in 2015, but will she be pregnant or have already given birth? Well, rumor has it that Kristen actually made off with Theresa’s TWINS – and when she returns to Salem she will have not one, but two babies.

Eve Donovan Pregnant With JJ’s Baby: The love triangle between Paige, her mom Eve, and JJ has had us all cringing for a few weeks now. Although there seems to be no real feelings between Eve and JJ, rumor has it they won’t be able to cut stay out of each other’s lives, because they have a baby on the way. Eve pregnant with her daughter’s boyfriend’s baby is a classic soap storyline.

Melanie Jones Hooks Up With Brady: Days of Our Lives spoilers have confirmed that Molly Burnett is returning as Melanie Jonas. When Melanie was in Salem her main love interest was Chad DiMera, and the couple had a tumultuous relationship. But Days rumors tease that when Melanie returns she will be over Chad, and winds up hooking up with Brady Black!

So Days fans, keep in mind those are all rumors, and may or may not come true. But, do you think EJ DiMera will come back to life? Have you gotten a gay vibe from Paul Norita? What are the odds of Kristen DiMera having twins, or Eve getting pregnant? Let us know what you think in the comments below and don’t forget to check CDL tomorrow for more Days of Our Lives spoilers and news.