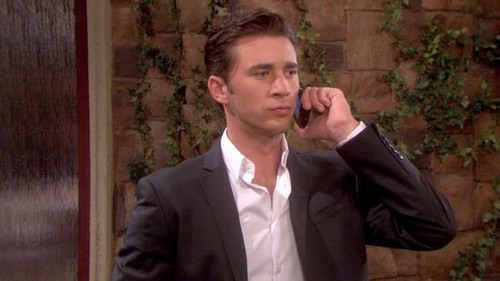 Days of Our Lives spoilers and news for the week of November 24-28 reveal some exciting episodes of the NBC soap, and rumor has it DOOL fans will not want to miss them. Molly Burnett has returned to Salem as Daniel’s daughter Melanie Jonas, but she has a lot of catching up to do after her time in Europe. According to Days of our Lives spoilers, things really heat up between Nicole and Melanie’s father – and Melanie is concerned when she finds Nicole running around Daniel’s apartment in nothing but a towel.

According to Days of Our Lives spoilers for the week of November 24, Nicole isn’t the only one that Melanie has an awkward run-in with. Chad DiMera (Billy Flynn) is thrown for a loop when he learns that his ex is back in town and the former lovers share an awkward confrontation. Chad isn’t the only man to share scenes with Melanie (Molly Burnett) during the week of November 24, rumor has it she also has an interesting meeting with Abigail’s boyfriend Ben.

And in other Salem news, JJ continues to go back and forth with Eve (Kassie DePaiva) over whether he should dump Paige (True O’Brien). DOOL spoilers tease that during the week of November 24, Marlena gets a new client, and Jordan’s (Chrishell Stause) father Clyde signs up for therapy. Days fans can also expect to see Jordan continue to spiral downward during the upcoming week – and lash out at Kate for bringing Clyde to Salem.

So DOOL fans, do you think that JJ will dump Paige, or will she find out the truth about him and her mother Eve and dump him? Is there a chance Melanie and Chad will get back together? What do you think of Daniel and Nicole together? Let us know what you think in the comments below and don’t forget to check CDL tomorrow for more Days of Our Lives spoilers and news.