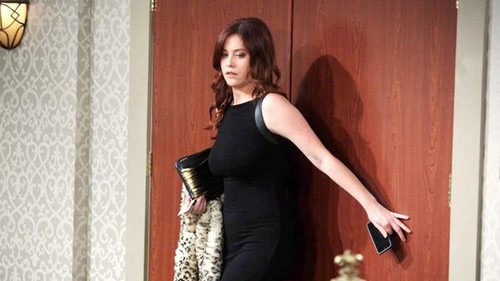 “Days of Our Lives” spoilers for Tuesday, March 24, tease that one Salemite is in for quite a shock. DOOL viewers know that Clint (Lucas Kerr) is in town to carry out Kristen’s (Eileen Davidson) orders. Clint already shot Brady (Eric Martsolf) with a tranquilizer dart and stole a vial of his blood. Now Clint’s about to move on to his next target: Theresa (Jen Lilley). Clint will drug Theresa and it looks like he could take a blood sample from her as well. It’s not clear what Kristen has in mind, but you can bet that she’s up to no good. Most “Days” fans wouldn’t have it any other way.

As Theresa deals with her shady boyfriend, Nicole (Arianne Zucker) will meet a mystery man of her own. However, if you’re hoping for a new love interest for Nicole, you may be disappointed. Other “Days of Our Lives” spoilers for Tuesday, March 24, hint that Serena (Melissa Archer) will have an unexpected visitor. Since Paul Telfer is set to appear as Serena’s boss, the dashing Scottish actor sounds like a good fit for the handsome stranger Nicole will encounter. The rumors have been saying Nicole would meet someone DOOL viewers might recognize and it looks like those rumors were right. Paul Telfer recently played Damon, a hit man hired by Victor, and he’ll be back as Xander to get updates on the progress of Serena’s mission. Check out Tuesday’s episode to see if Serena delivers the diamonds as promised.

More “Days of Our Lives” spoilers for Tuesday, March 24, indicate that Hope (Kristian Alfonso) will meet Clyde (James Read) and her suspicions will immediately be raised. Perhaps it’s that keen intuition all Salem cops seem to have. Never mind that people are being drugged and diamonds are being smuggled. Clyde’s the troublemaker Hope will finally getting around to noticing. Still, it’s about time Clyde popped up on Hope’s radar. After all, one of Clyde’s men was responsible for killing EJ (James Scott). Will countrified Clyde ever pay for his crimes? Why, he “shore” will! At least that’s what most of us are hoping. Stick with the NBC soap to find out if Clyde will get what’s coming to him.

So “Days” fans, what do you think about the news that Clint will drug Theresa? What does Kristen have planned? Will Nicole spot Xander and put her investigative skills to good use? What about Hope’s encounter with Clyde? Will Clyde soon be moving on to greener pastures? Let us know what you think in the comments below and don’t forget to check CDL tomorrow for the latest “Days of Our Lives” spoilers, rumors, updates and news.