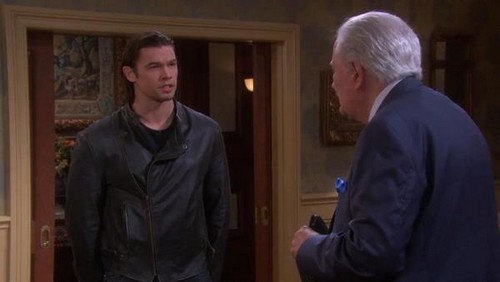 “Days of Our Lives” spoilers for March 23 – 27 tease a week full of exciting drama on the NBC soap, and rumor has it DOOL fans will not want to miss a single episode! All hell is breaking loose in Salem this week – and a few storylines will finally reach their boiling point. According to “Days of Our Lives” spoilers and news, this is what fans can expect to see during the week of March 23:

Monday, March 23: “Days of Our Lives” spoilers for March 23rd reveal that Ben will have a life-changing question for Abigail Deveraux (Kate Mansi). Meanwhile, across town, Will and Paul bump heads again and Will (Guy Wilson) threatens the baseball player. While Will and Paul are bickering, Adrienne (Judi Evans) and Sonny have a long talk about the future of his marriage.

Tuesday, March 24: According to DOOL spoilers, on Tuesday’s episode of the NBC soap one of our favorite Salemites finds herself in serious danger – on March 24th Teresa Donovan’s (Jenn Lilley) shady new beau Clint drugs her! “Days of Our Lives” coming and going news reveal that actor Paul Telfer makes his debut as Xander.

Wednesday, March 25: On Wednesday’s episode of “Days of Our Lives,” spoilers tease that DOOL fans can expect to see Paige (True O’Brien) and Daniel having a game-changing chat. Paige reveals to Daniel (Shawn Christian) that she thought he had slept with her mother Eve (Kassie DePaiva) because a man in her bedroom was wearing a jacket just like his – Daniel puts two and two together and realizes that Eve’s hot hook-up was JJ, and he had borrowed Daniel’s jacket that night.

Thursday, March 26: “Days of Our Lives” spoilers for Thursday’s episode of the NBC soap reveal that Paige’s mom Eve begins scrambling to keep her secret quiet – and she tries to recruit a new ally. Meanwhile, across town newcomer Xander sets his sights on Nicole Walker (Arianne Zucker) – and sparks fly between the pair.

Friday, March 27: According to DOOL spoilers for Friday March 27th, fans of the NBC soap can expect to see Paul Narita (Sean Christopher) making a shocking confession to Sonny, which only further complicates the ongoing love triangle between Paul, Will, and Sonny.

So, Days fans, what do you think Daniel will do when he realizes that Eve is having an affair with JJ? Why does Clint drug Theresa – what does he plan to do to her? Is this the end of Will and Sonny, will Sonny wind up with Paul Narita? Let us know what you think in the comments below and don’t forget to check CDL tomorrow for more “Days of Our Lives” spoilers and news.