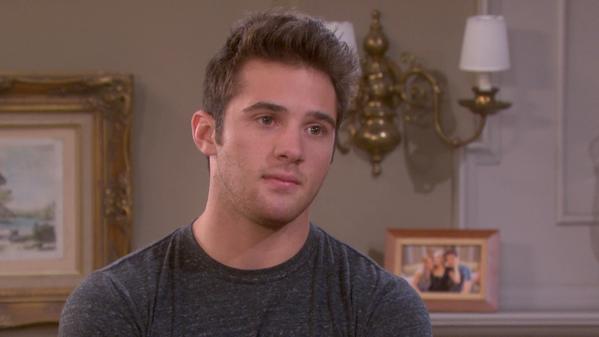 “Days of Our Lives” spoilers for Thursday, March 19, hint that Will (Guy Wilson) wants Paul (Christopher Sean) out of Salem and he wants him out now. Will found an old picture of Tori (Hira Ambrosino) and a little investigating led him to the conclusion that Paul is a DiMera. Since Paul has been slow to leave town, Will figures maybe Tori can give Paul a motherly push to send him on his way. If Tori can’t complete the task as promised, she could be in a world of trouble.

“Days of Our Lives” spoilers tease that Will won’t hesitate to reveal who Paul’s father is if Tori doesn’t comply. Tori is certainly willing, but she may not be able. John (Drake Hogestyn) convinced Paul to spend a couple of extra days in Salem to support the baseball little league. Apparently, Will couldn’t care less about the happiness of children. It’s actually a little surprising considering how juvenile Will’s been acting.

As Will confronts Tori with his new evidence, Nicole (Arianne Zucker) will confront Serena (Melissa Archer) about what she’s been up to. So far, all we know about the famous elephant swap of 2015 is that Serena wants to swap her statue for Eric’s (Greg Vaughan), which has a secret compartment. Since Serena and Eric picked up their elephants together in Africa (and no, that’s not a euphemism), maybe some valuable blood diamonds were smuggled inside one of them. Serena almost made the switch, but she was once again left with an empty elephant after being startled by Nicole.

Unfortunately, Serena’s foiled attempt also tipped off Nicole to the fact that there are two identical elephants. Once Nicole gets an idea in her head, there’s just no stopping her. You can bet that Nicole will get to the bottom of things soon enough. Check out the Thursday, March 19 episode of “Days” to see how long Serena can deflect Nicole’s suspicions.

Other “Days of Our Lives” spoilers for Thursday, March 19, tease that JJ (Casey Moss) will continue to work for Paige’s (True O’Brien) forgiveness. Paige has been fed up with JJ’s erratic behavior and she isn’t entirely convinced that he’s not playing games. Unfortunately for Paige, she has no idea about the games JJ’s been playing in the bedroom with Eve (Kassie DePaiva). Nevertheless, JJ’s adamant that he can fix the situation and he’ll be reunited with his “true love.” DOOL rumors say Daniel (Shawn Christian) will learn about JJ’s hookups with Eve and his mission will become increasingly harder to accomplish. Be on the lookout for another appearance by Daniel’s jacket. Word has it the borrowed coat will play a big role in how everything unfolds. We’ll give you updates as Daniel gets closer to the truth.

So “Days” fans, what do you think about the news that Will is about to take his blackmail scheme up a notch? Will Sonny (Freddie Smith) blow his top when he finds out? What about Nicole’s confrontation with Serena? Will DOOL viewers finally learn what’s in that elephant statue? When Paige inevitably forgives JJ, will she be completely crushed when she discovers his secret? Let us know what you think in the comments below and don’t forget to check CDL tomorrow for the latest “Days of Our Lives” spoilers, rumors, updates and news.