‘Days of Our Lives’ Spoilers: Kate and Stefano Fight Dirty – Clint Poisons Brady – Eve and Paige Both Drawn to JJ 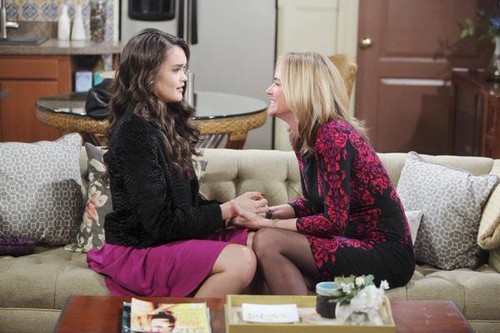 “Days of Our Lives” spoilers for Monday, March 16, tease that a boardroom showdown is on the way. Stefano (Joseph Mascolo) just got back in town, but he’s already causing big trouble. Kate (Lauren Koslow) claims to have something up her sleeve, but it’s going to take more than that to outsmart a DiMera. Still, Kate could prove to be a worthy opponent. Stefano may have Chad (Billy Flynn) on his side, but Kate’s not going to hand over the CEO position without a fight. DOOL fans are in for a treat as Kate and Stefano jockey for control in the biggest corporate battle Salem’s ever seen.

As Stefano and Kate tear each other apart, JJ (Casey Moss) and Paige (True O’Brien) will be drawn closer together. “Days” viewers saw that Paige wasn’t interested in JJ’s pitiful version of an apology. However, we all knew Paige would come around eventually. “Days of Our Lives” spoilers hint that Paige’s hard heart will begin to soften as JJ performs in a music showcase at Salem University. Unfortunately, it looks like Paige could have some competition. Eve (Kassie DePaiva) will also find herself drawn to JJ’s heartfelt guitar strumming. Mrs. Robinson—er, make that Ms. Larson—can’t seem to resist JJ’s good looks and musical charm. Honestly, if those two end up in bed again, Jennifer’s (Melissa Reeves) head is going to explode.

Other “Days of Our Lives” spoilers for Monday, March 16, suggest that Theresa (Jen Lilley) will be stunned when Clint (Lucas Kerr) shows back up in Salem. Theresa doesn’t realize that the surprises are just beginning. Clint has strict orders from Kristen (Eileen Davidson) and those instructions could mean bad news for Theresa and Brady (Eric Martsolf). We don’t know for sure what Kristen has planned, but word has it Brady could wake up with an unexplained puncture wound later in the week. Those DiMeras just love injecting strange substances, don’t they? We’ll give you updates if those rumors turn into confirmed “Days of Our Lives” spoilers.

As Clint arrives to stir up trouble, Brady will have a conversation with Melanie (Molly Burnett) about her time in Europe. Since DOOL writers zoomed through the whole casino heist revelation, perhaps we’ll get to hear a few more details about why Melanie did it. Then again, perhaps Melanie will recall fonder memories of living abroad. It may not be the most exciting scene on Monday, March 16, but at least Brady’s chat will provide him with the calm before the storm. Brady’s life will be anything but boring once Kristen’s plan goes into action.

So “Days” fans, what do you think about Stefano and Kate fighting for control of DiMera Enterprises? What about Paige and Eve’s attraction to JJ? Could Eve and JJ really hook up again? What does Kristen have in store for Brady and Theresa? Can Brady figure out Kristen’s scheme before Theresa gets hurt? Let us know what you think in the comments below and don’t forget to check CDL tomorrow for the latest “Days of Our Lives” spoilers, rumors, updates and news.