Days of Our Lives Spoilers: Paul’s Father Uncovered by Will, Clint Moves on Brady and Theresa, Sonny Returns, Stefano Arrested? 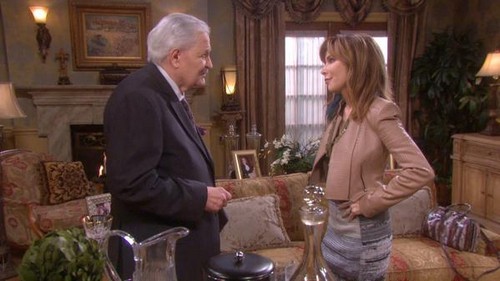 “Days of Our Lives” spoilers for March 16-20 tease another exciting week of drama in Salem – not that there is ever a dull moment on the NBC soap. Rumor has it that DOOL fans will not want to miss a single episode! Tensions fly in the less than sleepy town of Salem, and according to “Days of Our Lives” spoilers, this is what viewers can expect to see during the week of March 16th:

Monday, March 16: “Days of Our Lives” spoilers for Mondays episode of the NBC soap reveal that Stefano DiMera (Joseph Mascolo) and Kate continue to battle it out in the DiMera boardroom – Kate (Lauren Koslow) is determined not to lose control of the company. Rumor has it that sparks will fly between the two characters, and neither of them is willing to back down.

Tuesday, March 17: According to “Days Of Our Lives” spoilers on the March 17th episode of the NBC soap, Clint finally makes his move and carries out the mission that Kristen DiMera (Eileen Davidson) sent him to do, and Brady and Theresa Donovan (Jenn Lilley) are his prime targets.

Wednesday, March 18: “Days of Our Lives” spoilers for Wednesday, March 18th reveal that Brady (Eric Martsolf) will find himself in the hot seat – and trying to convince his friends and family that he is innocent of something. Meanwhile, across town, Hope (Kristian Alfonso) and Abe race to arrest Stefano before the slippery DiMera leaves Salem again. Also, coming and going news confirm that Freddie Smith will return on March 18th as Sonny Kiriakis.

Thursday, March 19: On March 19th “Days of Our Lives” fans can expect to see some exciting drama in Salem when Will blackmails Paul Narita’s mother Tori. Will (Guy Wilson) put on his detective hat and discovers who Paul’s father is – he threatens Tori and orders her to take Paul (Christopher Sean) and leave town for good before he reveals the identity of her baby-daddy.

Friday, March 20: DOOL spoilers tease that on Friday March 20th Nicole (Arianne Zucker) and Eric (Greg Vaughn) have a chat about Serena (Melissa Archer), and Nicole realizes that her suspicions about the new lady in Eric’s life have been correct all along. NBC soap spoilers from the latest edition of Soap Opera Digest also confirm that DOOL fans can expect to see a tense reunion between Will and his hubby Sonny on Friday’s episode.

So Days fans, who do you think will come out on top – Kate or Stefano? Will the Salem police finally be able to arrest the DIMera patriarch? What do you think Clint does to Brady and Theresa? Who is Paul Narita’s father? Let us know what you think in the comments below and don’t forget to check CDL tomorrow for more “Days of Our Lives” spoilers and news.