‘Days of Our Lives’ Spoilers: JJ Struggles to Win Paige Back, Stefano Strikes Kate, Rafe Learns What Victor’s Been Up To 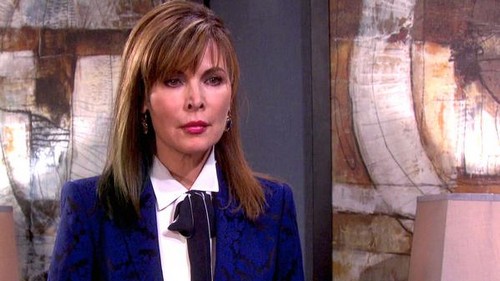 “Days of Our Lives” spoilers for Tuesday, March 10, indicate that big trouble is brewing in little Salem. Of course, DOOL viewers know that trouble has a name and it’s Stefano DiMera (Joseph Mascolo). It seems Stefano will make a move that will put the pieces in place for his next sinister scheme. Chad (Billy Flynn) is set to be Stefano’s right-hand man through it all. By the time the DiMera men are done, Kate (Lauren Koslow) will never know what hit her.

Other “Days of Our Lives” spoilers for Tuesday, March 10, hint that there could be a glimmer of hope for JJ (Casey Moss). Now that Jennifer (Melissa Reeves) worked her meddlesome magic, Eve (Kassie DePaiva) won’t stand in JJ’s way as he tries to reconcile with Paige (True O’Brien). However, that reconciliation may not be as easy as JJ thought. Now that Paige has finally moved on, she may not be too keen on the idea of getting back together. Paige doesn’t know about JJ’s affair with Eve, but she knows that JJ’s been a real jerk. Still, Paige practically stalked JJ at one point and it seems likely she’ll forgive her “true love.” DOOL rumors say that Paige will learn about Eve and JJ’s hookups eventually so stay tuned to see how the truth comes out.

Meanwhile, Nicole (Arianne Zucker) will have some questions in the Tuesday, March 10 episode and she’ll turn to Salem’s hotshot lawyer for the answers. “Days of Our Lives” spoilers tease that Nicole will ask Aiden (Daniel Cosgrove) for a bit of advice and he’ll do his best to steer her in the right direction. In the end, the conversation will probably prove fairly pointless. Nicole rarely lets anyone tell her what to do.

Other DOOL spoilers reveal that Rafe (Galen Gering) could offer his own advice to Victor (John Aniston). Rafe is about to discover what Victor’s been up to and the former cop’s interest will definitely be peaked. Victor made a deal with Clyde (James Reed) to protect his family, but Rafe’s interference could mean bad news for the people Vic holds near and dear to his heart. Will Rafe’s snooping put another Kiriakis in jeopardy? Stick with the NBC soap to see if there will be deadly consequences for Rafe’s actions.

So “Days” fans, what do you think about Stefano’s plot to bring down Kate? What about the possibility of JJ and Paige sorting out their problems? Will Aiden’s advice prove helpful to Nicole? Can Rafe get to the bottom of things without another Kiriakis getting hurt? Let us know what you think in the comments below and don’t forget to check CDL tomorrow for the latest “Days of Our Lives” spoilers, rumors and news.