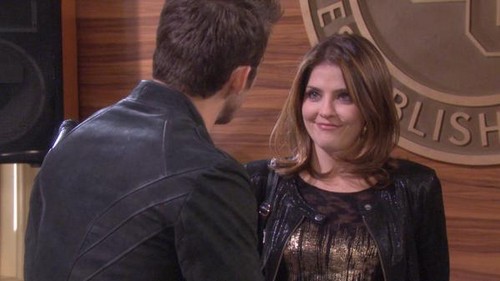 “Days of Our Lives” spoilers for Wednesday, March 18, tease that Justin (Wally Kurth) will head to Dubai, but not before having another heated exchange with Adrienne (Judi Evans). “Days” fans know that things have been tense between the pair lately. Adrienne didn’t seem to buy Justin’s “work wife” story and she won’t be happy that Justin’s abandoning her once again. Justin will undoubtedly have a few words for Adrienne as well. After all, Adrienne’s been getting awfully cozy with Lucas (Bryan Dattilo) over the past few weeks. Still, what should Justin expect? By leaving Adrienne again and again, Justin’s practically throwing his wife into another man’s arms. It appears Justin will continue to break Adrienne’s heart and Lucas will be waiting to pick up the pieces.

As Justin says sayonara to Salem, Sonny (Freddie Smith) will come back to more drama. “Days of Our Lives” spoilers for Wednesday, March 18, indicate that Sonny will run into Paul (Christopher Sean) shortly after he arrives in town. Word has it Paul’s chat with Lucas and brief look at little Ariana Grace (Harper and Sydnee Udell) really hit home. However, as much as he doesn’t want to break up Sonny’s family, Paul can’t seem to control his emotions. Perhaps Paul will tell Sonny that he still loves him and he’ll be waiting if his relationship with Will (Guy Wilson) doesn’t work out.

Considering the blackmail scheme Will has going, it looks like Sonny will be available soon enough. DOOL spoilers hint that Will’s about to take his stupidity to the next level by meddling in Tori’s (Hira Ambrosino) life. Tori will be as jittery as ever when Will starts putting his plan into action. It looks like it’ll be Thursday before Will pulls out the big guns, but no one should be surprised that Will is taking his time. We all know how long Will takes to write an article.

Other “Days of Our Lives” spoilers for Wednesday, March 18, suggest that Brady (Eric Martsolf) will have to defend himself to his family and friends. Brady already faced suspicions from Daniel (Shawn Christian) after his little run-in with Clint (Lucas Kerr). As more drug-related accusations get thrown around, Brady will try to piece together what really happened. The latest DOOL rumors say Kristen (Eileen Davidson) could be back any day now so we’ll give you updates on how she’ll make her grand entrance.

So “Days” fans, what do you think about the news that Justin will leave his marriage in turmoil? Does this mean Justin and Adrienne are over? What about Will and Sonny’s relationship? Will Sonny get back together with Paul after Will screws everything up again? What about the new mystery for Brady? Will Brady figure out that all roads lead to Kristen DiMera? Let us know what you think in the comments below and don’t forget to check CDL tomorrow for the latest “Days of Our Lives” spoilers, rumors, updates and news.