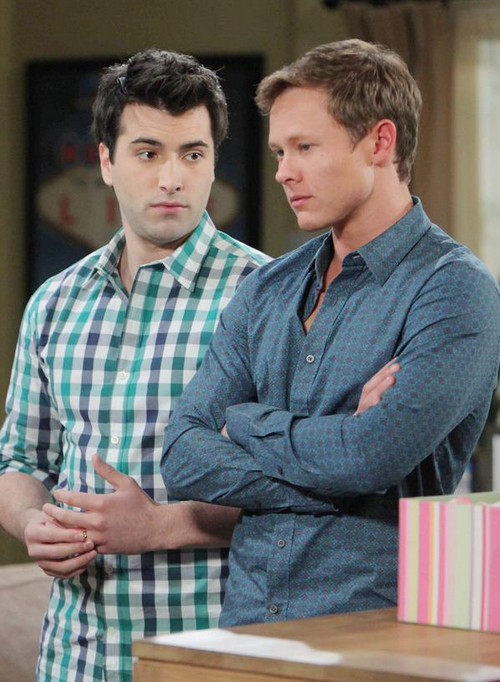 “Days of Our Lives” spoilers for Monday, March 23, tease that Serena (Melissa Archer) will once again raise Nicole’s (Arianne Zucker) suspicions. For months, Serena has been thinking about one thing and one thing only: swap those elephants. However, it turns out Serena didn’t have to make the switch after all. A moment alone was all it took for Serena to grab the stash of diamonds from the secret compartment. Now that Serena has what she wants, she’ll finally be able to let go of her obsession with the duplicate statue. Unfortunately, Serena spent a lot of time asking about the elephant, drawing the elephant, looking at the elephant, dropping the elephant…you get the idea. Basically, her life has revolved around getting her hands on that statue. When Serena suddenly doesn’t care anymore, you can bet that Nicole will notice. Serena may think she’s in the clear, but we all know Nicole will find a way to screw up her plans.

Meanwhile, it looks like Will’s (Guy Wilson) about to stir up more trouble. DOOL fans heard Will say he’d reveal Paul’s (Christopher Sean) father if Tori (Hira Ambrosino) didn’t convince him to leave town. Will suggested that Paul is a DiMera and Tori didn’t deny it. However, the idea is pure speculation on Will’s part. The latest “Days” rumors say that Paul may actually be John’s (Drake Hogestyn) son. “Days of Our Lives” spoilers hint that Will and Paul will have a confrontation on Monday, March 23. Could Paul really let Will in on his secret past this early? It’s probably a bit too soon for that reveal, but Will’s warning will still give Paul something to think about.

Other “Days of Our Lives” spoilers for Monday, March 23, indicate that Adrienne (Judi Evans) will give Sonny (Freddie Wilson) some marital advice. Considering everything she’s been through with Justin (Wally Kurth), perhaps Adrienne will tell Sonny to fix his relationship before it crumbles completely. Adrienne knows firsthand what it’s like the feel detached from a spouse. Whether the distance is physical or emotional, the gap needs to be bridged before it’s too late. Maybe Adrienne’s guidance will help Sonny figure out if he wants to rebuild his marriage.

Speaking of marriage, could wedding bells be in the future for another Salem couple? “Days of Our Lives” spoilers say Ben (Robert Scott Wilson) will ask Abigail (Kate Mansi) a life-changing question. Ben believes he’s found the girl of his dreams and it’s possible that he’ll ask Abby to tie the knot. However, it may be too soon for a guy that would barely speak to anyone when he first came to town. It seems more likely than marriage, Ben will ask Abigail to move in with him, which could be considered life-changing. At least Abigail could finally leave Jennifer (Melissa Reeves) and JJ (Casey Moss) alone to sort out their Paige (True O’Brien) issues. Stick with DOOL to see if Abigail updates her living arrangement.

So “Days” fans, what do you think about the news that Nicole could be the one to bring Serena down? Will Paul continue to go after Sonny or can Will convince him to butt out? What words of wisdom will Adrienne have for Sonny? Will Ben propose to Abigail or does he have something else in mind? Let us know what you think in the comments below and don’t forget to check CDL tomorrow for the latest “Days of Our Lives” spoilers, rumors, updates and news.