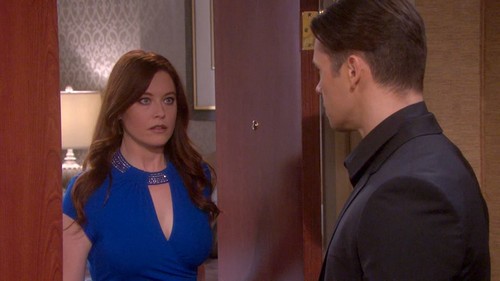 “Days of Our Lives” spoilers for Monday, April 6, hint that Daniel (Shawn Christian) and Jennifer (Melissa Reeves) will clash over JJ’s (Casey Moss) secret. When Daniel realized that JJ hooked up with Eve (Kassie DePaiva), he certainly didn’t approve of all the lies. Dr. Dan always sticks his nose where it doesn’t belong and Jen will insist the matter is none of his business. It seems likely that Daniel will argue that it’s not right to toy with Paige’s (True O’Brien) emotions. Besides, the truth is bound to come out eventually and it’s going to be even more devastating now that Paige and JJ are back together. Unfortunately, none of that seems to matter to Jen. All Jennifer seems to care about is her precious baby boy’s happiness.

While Jen argues with Daniel, Eve could make a costly mistake. “Days of Our Lives” spoilers tease that Eve will do something that could expose her affair with JJ. If JJ wanted to hook up, he sure picked the wrong person to do it with. First of all, Eve is Paige’s mother. That should have been a big red flag. Beyond that, Eve has quite possibly the worst judgment ever. Yes, it takes two to tango, but at least JJ can play the “young and dumb” card. Eve should’ve known better. Plus, Eve continues to make a mess of things by scheming with Cole (Riley Bodenstab). There’s no way her plan will go off without a hitch so stick with DOOL to find out where she’ll slip up.

Other “Days of Our Lives” spoilers indicate that Eric (Greg Vaughan) will overhear a tense conversation between Serena (Melissa Archer) and Xander (Paul Telfer). Eric might not catch all details, but he’ll likely hear enough to know that Xander’s visit isn’t as friendly as he claimed. Knowing Eric, he’ll probably make Serena out to be the victim. However, one of these days Eric will get a clue. Sooner or later, Eric will have to admit that Nicole (Arianne Zucker) was right about Serena all along. Could an apology lead to reconciliation for Eric and Nicole? “Days” rumors say they could find their way back to each other. Stay tuned to DOOL to see if “Ericole” will get a second chance.

So “Days” fans, what do you think about the news that JJ’s secret will cause tension for Daniel and Jennifer? What mistake will Eve make? What about the conversation Eric will overhear? When Eric gets updates on Serena’s true motive for being in Salem, will he apologize to Nicole? Let us know what you think in the comments below and don’t forget to check CDL tomorrow for the latest “Days of Our Lives” spoilers, rumors, updates and news.