‘Days of Our Lives’ Spoilers: Eve and Cole Sabotage Paige and JJ’s Relationship – Sonny Thanks Paul – JJ Confesses to Daniel 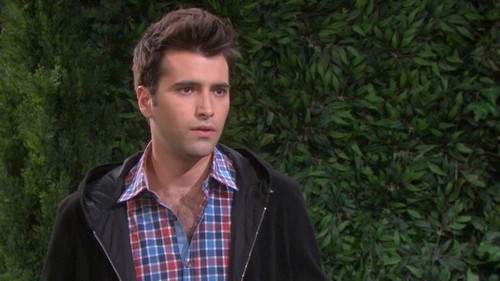 “Days of Our Lives” spoilers for Tuesday, March 31, tease that JJ (Casey Moss) will come clean to Daniel (Shawn Christian) about his affair with Eve (Kassie DePaiva). JJ tried to play it cool when Daniel questioned him about the jacket he borrowed, but it was clear that Dan knew what had gone on. Now all JJ can do is spill the whole story and hope that Daniel will understand. Of course, Daniel will probably lecture him about doing the right thing. Dan seems to think of himself as the moral compass of Salem despite the fact that he has his own list of transgressions. DOOL fans remember how Daniel treated

Nicole (Arianne Zucker) when he learned she was hiding evidence that would clear Eric (Greg Vaughan). Daniel basically said “You tell Eric or I will.” It seems likely that JJ could face a similar scenario. Will JJ be forced to tell Paige (True O’Brien) he hooked up with Eve? We’ll have to wait and see, but having one more person in the know can’t be good news for JJ.

If JJ doesn’t cause a breakup on his own, Eve and Cole (Riley Bodenstab) will take a whack at it. “Days of Our Lives” spoilers hint that Eve will tell Cole her plan for sabotaging Paige and JJ’s relationship. It’s not clear what their scheme entails, but it probably won’t work. Let’s face it: Eve and Cole aren’t the sharpest tools in the shed. Eve hooked up with her daughter’s boyfriend and Cole’s mind was blown by “Hot Tub Time Machine.” We’re not exactly dealing with rocket scientists here. It’s going to take every last brain cell Tweedledee and Tweedledum have to put together a plan that’s not destined for failure. Stick with “Days” to see if Eve and Cole’s plot will backfire.

Other “Days of Our Lives” spoilers indicate that Sonny (Freddie Smith) will have a deep conversation with Paul (Christopher Sean). Chad (Billy Flynn) recently told Sonny that Paul donated blood during his surgery. Sonny is undoubtedly hurt and angry, but he still owes Paul his life. When Sonny thanks Paul for his selfless donation, perhaps the tension between them will start to lift. The rumors say that Sonny and Paul could have an affair of their own so we’ll have to see how far this goes. If Will (Guy Wilson) gets updates that Paul and Sonny are growing closer, he’ll be more determined than ever to destroy Paul’s life. Stay tuned to DOOL to find out how far Will is willing to go.

So “Days” fans, what do you think about JJ confessing everything to Daniel? What about Eve and Cole’s big scheme? Do you think it will work? Will Sonny and Paul rekindle their romance in the near future? Let us know what you think in the comments below and don’t forget to check CDL tomorrow for the latest “Days of Our Lives” spoilers, rumors, updates and news.