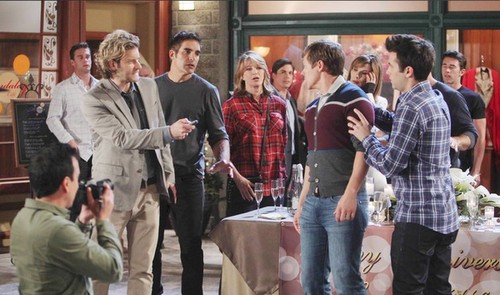 “Days of Our Lives” spoilers tease that some new faces are set to show up in Salem. Many DOOL fans have noted the lack of diversity on the NBC soap and it seems producers are trying to do something about it. According to Soap Opera Digest, a casting call recently went out for a “stunning, strong and savvy” African-American woman in her late 20s to early 30s. The character will be named “Lani” and it’ll be a recurring role. However, if producers find someone the audience really connects with, there’s a good chance it could be bumped up to a contract part.

Once the casting process is complete, the actress will start shooting in mid-April. It should be interesting to find out what brings Lani to town and who her love interest might be. Of course, “Days” tapes several months in advance so we’ll have to see which relationships will fizzle by then. Be on the lookout for Lani’s debut in late summer or early fall on “Days of Our Lives.”

In addition to Lani, DOOL fans will get their first look at a SORASed Joey soon. James Lastovic signed a two-year contract to play Joey Johnson. In the casting call, Joey was described as “16-year-old gorgeous Caucasian male who struggles with resentment and abandonment issues.” Lastovic, 20, is a bit older than his character, but producers seem confident that they’ve found the right fit. Rapidly aging children on soaps always riles up a few viewers, but at least it means we’ll get some exciting new storylines.

Joey is the son of Patch (Stephen Nichols) and Kayla (Mary Beth Evans) so it’ll be fun to see everyone as an onscreen family. Stephen Nichols recently agreed to return for “Days of Our Lives” 50th anniversary and the rumors say angst-ridden Joey might be what brings Patch back to Salem. James Lastovic’s first scenes will most likely air sometime around August. Stick with CDL for updates on what Joey’s first big storyline will be.

So “Days” fans, what do you think about the latest casting news? Are you excited about the new character of Lani? Who do you think she’ll be paired with? What about James Lastovic earning the part of Joey? Do you support SORASing the kiddies so they can have more substantial storylines? Let us know what you think in the comments below and don’t forget to check CDL tomorrow for the latest “Days of Our Lives” spoilers, rumors, updates and news.