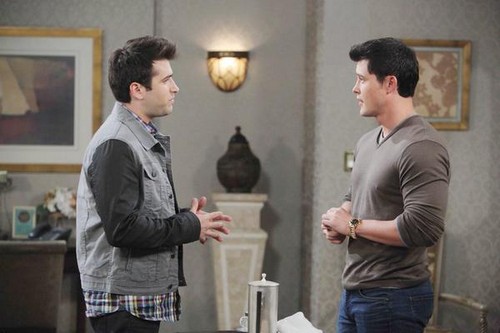 “Days of Our Lives” spoilers for Friday, March 27, tease that Theresa (Jen Lilley) will receive an unpleasant surprise. It’s not clear what will startle Theresa, but there’s a good chance it has something to do with Kristen’s (Eileen Davidson) plan. Clint (Lucas Kerr) already drugged her, stole her blood and left a breakup note so it’s safe to say this has been a rough week for Theresa. Fortunately, Melanie (Molly Burnett) has slowly been getting closer to discovering the truth about Theresa’s stolen embryo.

“Days of Our Lives” spoilers hint that a clue from Brady (Eric Martsolf) will raise Melanie’s suspicions. Again, “Days” is keeping us mostly in the dark. However, we know that all roads lead to Kristen and that’s all that really matters. The rumors say Melanie could land herself in some hot water as she continues to dig for information. Stick with DOOL to find out what Kristen might have planned for meddlesome Melanie.

As Melanie tries to get to the bottom of one mystery, it appears Daniel (Shawn Christian) has another one all figured out. After Paige (True O’Brien) said she saw Daniel’s coat when Eve (Kassie DePaiva) had a man in her bedroom, Daniel remembered that he loaned JJ (Casey Moss) that same jacket. Daniel also recalled that JJ dramatically refused when he offered to let him keep it. Busted! “Days of Our Lives” spoilers indicate that Daniel will confront Jennifer (Melissa Reeves) with what he suspects.

After all, Jen’s been acting shady, too. Jennifer suddenly demanded that Daniel back off and now he knows why. When Daniel tells Jennifer that he’s put it all together, she’ll undoubtedly beg him to keep it a secret. We all know Dr. Dan’s still got the hots for “Jen Jen” on some level so he may agree to keep Paige out of the loop. Plus, Daniel has kept quiet for Nicole (Arianne Zucker) on more than one occasion. It’s only fair that Daniel keeps his mouth shut for Jennifer, too. Stay tuned to the NBC soap to see if Daniel will go against his better judgment.

Other DOOL spoilers reveal that Paul (Christopher Sean) will have a confession to make. Paul will take responsibility for his part in Will’s (Guy Wilson) affair by telling Sonny (Freddie Smith) the whole truth. Paul didn’t force Will to sleep with him, but he did imply that he wouldn’t move forward with the article if Will didn’t indulge. When Paul updates Sonny on what happened, it’s tough to say how he’ll react. It takes two to tango, but Sonny’s real beef is with his current husband, not his old flame. Will Sonny be willing to forgive Paul for nudging Will into bed? It seems likely. Word has it that Paul and Sonny will be tempted to do a tango of their own in the near future.

So “Days” fans, what do you think about the news that Melanie could crack the case of the stolen embryo? Can Jennifer convince Daniel to keep JJ’s secret? What about Paul’s confession to Sonny? Since Will is the one who’s married, is Paul really to blame for Will and Sonny’s relationship problems? Let us know what you think in the comments below and don’t forget to check CDL tomorrow for the latest “Days of Our Lives” spoilers, rumors, updates and news.