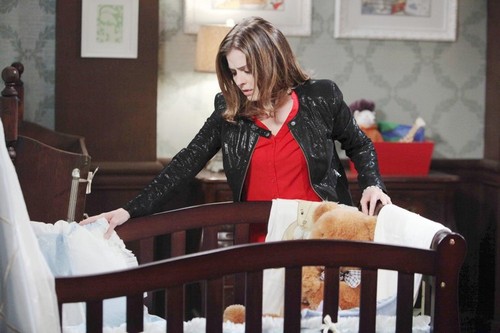 “Days of Our Lives” spoilers and news for April 27 – May 1 reveal that fans of the NBC soap can expect to see some action-packed drama. According to DOOL rumors, you will not want to miss a single episode! Spoilers tease that romance is in the air in Salem; meanwhile, in Europe, all hell breaks loose and there is a must-see reveal. “Days of Our Lives” spoilers reveal this is what DOOL fans can expect to see on the NBC soap during the week of April 27.

Monday, April 27: According to DOOL spoilers, on Monday, April 27, romance is in the air in Salem and “Days of Our Lives” fans can expect to see two Salemites share a hot and steamy kiss. Sparks have been flying between Chad DiMera (Billy Flynn) and Abigail Deveraux (Kate Mansi) for months now, and on Monday’s episode the tension between the former lovers boils over and Chad plants a kiss on Abigail.

Tuesday, April 28: April 28’s episode of “Days of Our Lives” will find Kristen DiMera (Eileen Davidson) in for a big shock when she comes face to face with someone from her past, and the villain’s schemes blow up in her own face.

Wednesday, April 29: “Days of Our Lives” spoilers tease that fans of the NBC soap will not want to miss the episode airing on Wednesday, April 29, Theresa Donovan (Jenn Lilley) is finally reunited with the baby she didn’t even know existed that she shared with former flame Brady Black (Eric Martsolf).

Thursday, April 30: Meanwhile, back in Salem, on Thursday’s episode of “Days of Our Lives” spoilers tease that Rafe and Eve Donovan (Kassie DePaiva) will have a heart-to-heart and he will offer her some advice on the current drama in her life. Also, DOOL spoilers reveal that there will be a major blow-up between Nicole (Arianne Zucker) and Daniel (Shawn Christian) over some secrets that they have been harboring.

Friday, May 1: “Days of Our Lives” spoilers for Friday May 1 reveal that fans of the NBC soap will get to see a tender moment between Nicole and her ex Eric (Greg Vaughn). Nicole’s conversation with the former priest inspires a change of heart for the journalist.

So DOOL fans, how do you think Theresa will react when she is reunited with the baby she didn’t know she had? Will she and Brady take their new family back to Salem? Is there a Chad and Abigail reunion in the works? How do you feel about Nicole and Eric possibly getting back together? Let us know what you think in the comments below and don’t forget to check CDL tomorrow for more “Days of Our Lives” spoilers and news.