‘Days of Our Lives’ Spoilers: Kristen Hides Baby from Brady – Nicole and Serena Brawl – Will Asks Marlena’s Help With Victor 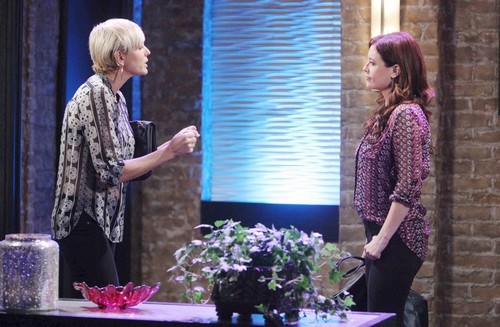 “Days of Our Lives” spoilers for Thursday, April 23, hint that Kristen (Eileen Davidson) will have a tough time keeping the truth from Brady (Eric Martsolf). Brady tried to coax the details of Theresa’s (Jen Lilley) embryo theft out of Kristen, but she didn’t take the bait. However, Brady didn’t travel halfway around the world for a little chitchat. It looks like Brady will decide he’s had enough of Kristen’s games. Now it’s time for answers.

Brady will demand to know where the child is, but Kristen will do everything in her power to keep Christopher hidden. Melanie (Molly Burnett) isn’t far behind Brady so it sounds like she could be walking into a risky situation. Brady knows that Kristen is crazy, but he may have underestimated just how deeply she loves this baby. Kristen’s future as a mother is at stake and she’s not about to let Brady blow this for her. Unfortunately for Kristen, Brady doesn’t intend to return to Salem empty-handed.

“Days of Our Lives” spoilers reveal that Nicole (Arianne Zucker) and Serena (Melissa Archer) will get into an all-out brawl. Nicole walked in on Serena trying to get the diamonds from Daniel’s (Shawn Christian) apartment and she’ll insist that Serena spill her secret. Serena has no intention of letting Nicole botch her plans, but she probably won’t have a say in the matter. Nicole knows Serena is hiding something and this is her big chance to figure out what it is. DOOL rumors say the jig is almost up. Stay tuned to “Days” to see who wins their latest wrestling match.

Looking ahead this week, it seems Will (Guy Wilson) is going to face some opposition as he tries to rebuild his marriage. Will views Paul (Christopher Sean) as his main threat, but there’s someone else that could stand in the way of his happiness. Victor (John Aniston) was furious when he heard the news of Will’s affair and he’d probably like to get Will out of Sonny’s (Freddie Smith) life for good. Victor is a man of great power and he usually gets what he wants. “Days of Our Lives” spoilers tease that Will and Marlena (Deidre Hall) will team up to prevent Victor from interfering. Stick with DOOL to see if they can get Victor to butt out.

So “Days” fans, what do you think about Kristen’s desperate attempt to hide the baby? Will Nicole wrestle the diamonds away from Serena? When Marlena gets updates on Victor’s actions, will she help give Will and Sonny’s marriage a fighting chance? Let us know what you think in the comments below and don’t forget to check CDL tomorrow for the latest “Days of Our Lives” spoilers, rumors, updates and news.