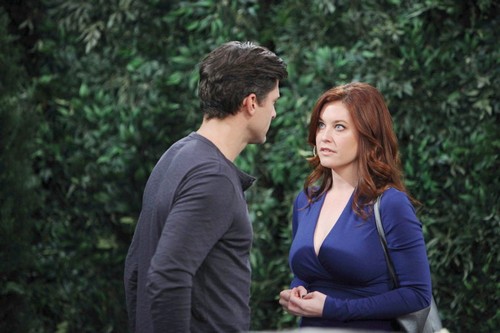 “Days of Our Lives” spoilers reveal that the much-hyped murder mystery will kick off in late August. Perhaps not-so-coincidentally, Xander (Paul Telfer) and Serena (Melissa Archer) will also be exiting DOOL sometime between August 17 and August 28. That could be the first clue to the whodunit. “Days” rumors have been hinting that Xander or Serena’s murder could be what sets the next storyline in motion. We don’t know the details of what lies ahead, but it’s clear that something big is about to go down.

First of all, we have two characters with nothing to lose and everything to prove. Xander has been demoted to doing yardwork for Victor (John Aniston) and he’s not happy about it. Xander probably resents Serena for dragging her feet with the elephant statue. Xander wanted Serena to get the job done and deliver the diamonds ASAP, but she hit snag after snag thanks to Nicole (Arianne Zucker). Xander eventually grew impatient and showed up in Salem to finish the task. Then, Xander got involved with Nicole and the whole thing snowballed from there. Now Xander is shoveling two tons of horse manure wondering how his life came to this.

Xander could easily snap and take Serena out. A new shed will be featured in one of the episodes in late August and “Days of Our Lives” rumors suggest that it could be significant. Maybe someone will open it up to find a dead body or better yet, someone may retrieve items from it to dispose of one. Could it be Serena that’s headed six feet under? It’s certainly possible. Let’s face it: this character was not well received and there’s no way she’s ever coming back. There’s really no reason to leave anything open. They might as well kill Serena and finally give Melissa Archer some good material to work with.

Here’s where the actual murder mystery might come in. Someone could kill Xander in retaliation for Serena’s death and his other ghastly misdeeds. There are a number of people who would like Xander out of the picture. Then again, DOOL writers could go another direction entirely. Serena could get rid of Xander and sneak out of town. Perhaps this is just the pre-murder mystery show. Whatever the case, you can bet there’s going to be plenty of excitement in Serena and Xander’s last scenes. Stick with “Days of Our Lives” to see if either one of them will make it out of Salem alive.

So “Days” fans, what do you think about the news that Xander and Serena could be killed off? Would you be on board with that idea? How do you think their exits will be handled? Are you making some updates to your speculation? Voice your opinion in the comments below and don’t forget to check CDL tomorrow for the latest “Days of Our Lives” spoilers, rumors, updates and news.