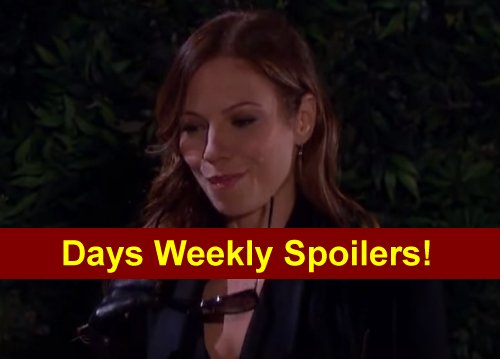 “Days of Our Lives” (DOOL) spoilers for the week of December 7-11 tease that several returns will shake things up on the NBC soap. First, we’ll see Ava Vitali (Tamara Braun) resurface on Wednesday, December 9.

This classic villainess is always nothing but trouble. Many “Days” viewers will be excited to see Ava back in Salem. Joey (James Lastovic) was recently revealed as Steve (Stephen Nichols) and Kayla’s (Mary Beth Evans) “stalker.”

However, Joey obviously didn’t come up with this plot on his own. Instead, Ava has likely been using Joey as her puppet under the guise of doing a good deed for his parents.

Since Joey desperately wants his mom and dad to reunite, he’s been eating this scheme up with a spoon. DOOL’s weekly promo shows Joey telling Ava that her plan is totally working.

Ava will be very pleased to hear that romance is in the air for Steve and his lady. Of course, Ava loved Steve once as well. That probably means Ava is holding a grudge or two.

You can bet that Ava has something devious in mind for Steve and Kayla. It may take a while for Ava’s secret strategy to emerge, but it’s bound to create some gripping drama.

When Steve and Kayla least expect it, danger and destruction could be lurking. We’ll also see the return of Philip Kiriakis this week, but he’ll have fresh look. John-Paul Lavoiser will debut in the role on Thursday, December 10.

Now that Brady (Eric Martsolf) has given up his job at Titan Industries, the company is going to need someone to steer the ship. Victor (John Aniston) called Philip and made sure he’d soon be on his way.

Philip will have his own ideas about how Titan should be run, which will bother Brady. In fact, Philip could cause even more problems down the road.

In an interview with Soap Opera Digest, John-Paul Lavoiser said his screen test for “Days of Our Lives” involved a scene with Jen Lilley as Theresa. The dialogue hinted at a power struggle and included some sexual overtones. Uh-oh.

That could mean bad news for Brady and Theresa’s newfound bliss. Will Theresa eventually be tempted by Philip’s confidence and good looks? Let’s hope not. If Theresa blows this chance with Brady, she may not get another one.

Philip will undoubtedly have his eye on the newly-single Belle (Martha Madison), too. They have a powerful history and sparks could fly once they’re living in the same town again.

Stick with “Days of Our Lives” for updates on how Philip will adjust to being back in Salem. So “Days” fans, what do you think about all the excitement happening on DOOL this week?