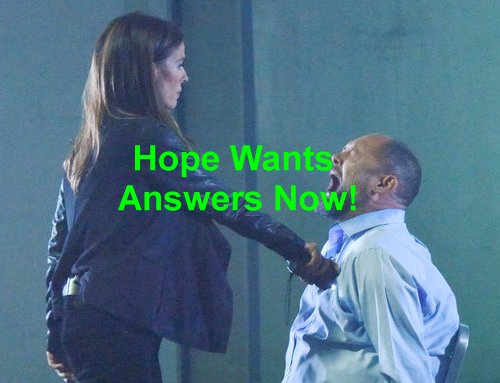 “Days of Our Lives” (DOOL) spoilers reveal that Hope (Kristian Alfonso) will have to resort to even shadier methods if she wants to get information on Bo’s (Peter Reckell) kidnapping.

Hope’s less-than-legal tactics have already landed her in hot water with Roman (Josh Taylor). It’s obvious that Hope is out of control and Roman will think she could use a break.

Roman will put Hope on leave, but she’ll continue to search for the truth. Hope may not be an active cop, but that doesn’t mean she’s just going to sit at home and knit. Instead, Hope will go after the evil masterminds behind the plot to hold Bo prisoner.

Dr. Malcolm (Adam Leadbeater) seems to be the key to this mystery and Hope is willing to do anything to unlock his secrets. “Days” spoilers tease that Dr. Malcolm will decide he’s willing to cooperate — for a fee.

Dr. Malcolm will demand that Hope cough up $500,000 in exchange for the answers she’s looking for. Hope has plenty of money to hand over, but she might be hesitant to do it.

Dr. Malcolm’s actions were a contributing factor in Bo’s demise and Hope may not want to give him a reward. Still, Hope ultimately wants to get to the people for whom Dr. Malcolm works.

DOOL buzz suggests that the DiMeras are behind all of this. If that’s true, it’s hard to believe Dr. Malcolm would risk inciting their wrath for quick cash. In other words, Dr. Malcolm could try to give Hope bogus info.

Whatever happens, Hope and Dr. Malcolm’s deal will go south. Dr. Malcolm will be the one who ends up paying the price. “Days of Our Lives” spoilers indicate that Hope will restrain Dr. Malcolm and torture him until he talks.

Hope will whip out a Taser and make sure Dr. Malcolm feels a little of the pain she’s been dealing with. Will Dr. Malcolm divulge the details before Hope goes too far? This encounter should leave DOOL viewers on the edge of their seats.

Stick with “Days of Our Lives” for updates on Hope’s attempt to avenge Bo’s death. So “Days” fans, what do you think about the news that Hope’s desperation will lead her to make some dangerous decisions?

Can Hope convince Dr. Malcolm to confess the identity of his employer? Voice your opinion in the comments below and don’t forget to check CDL often for the latest “Days of Our Lives” spoilers, updates and news.