Days of Our Lives (DOOL) Spoilers: Hope’s Wrath and Revenge For Bo’s Kidnapping – Stefano and Andre Fume Over Sami’s Escape 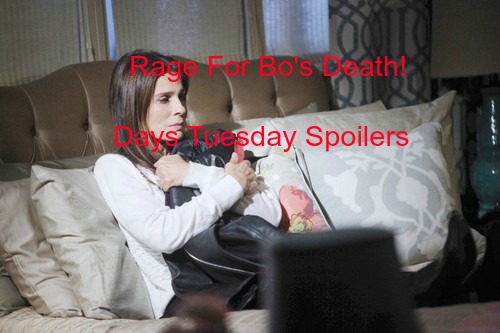 “Days of Our Lives” (DOOL) spoilers for Tuesday, November 24, tease that Stefano (Joseph Mascolo) and Andre (Thaao Penghlis) will fume over Sami’s (Alison Sweeney) escape. Now that Sami has given them the slip, Andre can’t make the deal John (Drake Hogestyn) proposed.

That means the DiMeras won’t be getting their bank pass codes back anytime soon. Nevertheless, you can bet that Andre and Stefano won’t give up. The DiMeras will stop at nothing to protect their dynasty.

Of course, they’ll have to handle another threat in the near future. “Days of Our Lives” spoilers reveal that Hope (Kristian Alfonso) will decide to get to the bottom of the mystery surrounding Bo’s (Peter Reckell) time in captivity.

Bo’s kidnapping obviously sounds like something that would be a classic DiMera move. Hope will set out on a mission to find the truth and it will undoubtedly lead to an ugly feud.

Meanwhile, DOOL spoilers say Wendy (Denice Duff) will try her best to help Abigail (Kate Mansi) make it through a tough labor. Abigail should’ve been taken to a hospital where the baby could receive the appropriate care after the birth.

Unfortunately, Ben (Robert Scott Wilson) wouldn’t allow it and now it’s too late. Abigail’s water broke and Wendy will have to do what she can at the cabin. The baby boy will survive, but he’ll still be in danger. “Days” rumors hint that there will be a desperate search for the child after Ben takes him on the run.

Other “Days of Our Lives” spoilers indicate that Chad (Billy Flynn) will finally get a major clue about Ben. Marlena’s (Deidre Hall) hypnosis is starting to jog Chad’s memory about the night of the fight. Chad will realize that Ben is the killer and he’ll frantically try to track Abigail down. Once Chad locates Abby, he’ll have to face Ben’s wrath. Stick with DOOL for updates on the aftermath of Ben’s next outburst.

So “Days” fans, what do you think about the news that Stefano and Andre will be forced to regroup after Sami’s getaway? What will be the first step in Hope’s investigation? Are you ready for Ben to pay the price for all the pain he’s caused? Let us know what you think in the comments below and don’t forget to check CDL often for the latest “Days of Our Lives” spoilers, rumors, updates and news.