Days of Our Lives Spoilers: Peter Reckell Says NOT The End For Bo – Open for Potential DOOL Return 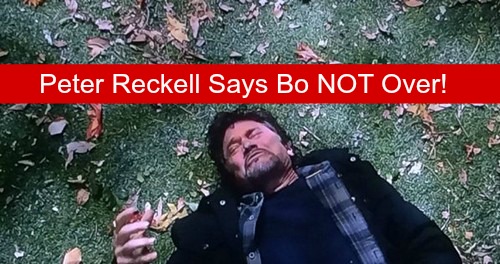 “Days of Our Lives” (DOOL) spoilers tease that we haven’t seen the last of Bo Brady (Peter Reckell). Bo lost his brief fight with a brain tumor and everyone has been mourning the loss of the iconic character. Though Bo’s death was heartbreaking, it looks like Bo’s run isn’t entirely finished. Peter Reckell recently sent out several tweets thanking fans for their support along with one that provided a little comfort.

Reckell said, “All I can say is WOW!! I know this has been a difficult time, mostly because I went through it to [sic] :) But it’s not quite over yet.” DOOL fans immediately became excited about all the possibilities, which prompted Reckell to clarify. “To be clear, it’s nothing big, just not the end. Don’t want to be accused of leading you on,” Reckell tweeted.

It appears we still have a couple of poignant scenes ahead of us. Although we pretty much got a goodbye party at the pub, “Days of Our Lives” might give Bo a fitting sendoff with a memorial service and a few more flashbacks. Before Bo’s death, he also told Steve (Stephen Nichols) that he’d know what to do in the end.

The statement puzzled many “Days” viewers, but we could learn what he meant soon enough. Perhaps Steve will scatter Bo’s ashes while riding the motorcycle or gazing out on the water. Maybe we’ll see Bo’s spirit riding off into the sunset on his boat.

Then again, there’s always the possibility that we could see a casket swap or a mysterious injection courtesy of the DiMeras. Reckell has said that he’s ready to get out of the soap biz entirely to spend time with his family. However, DOOL may have wanted to keep their options open.

People can change their minds. It might be wishful thinking, but it doesn’t hurt to keep hope alive! Whatever the case, everyone should stay tuned. The rumors hint that the aftermath of Bo’s death will launch some big storylines. Stick with “Days of Our Lives” for updates on the drama that lies ahead.

So “Days” fans, what do you think about the news that there’s more to come from Bo? How will DOOL close out this chapter and could they leave it open for something else down the road? Let us know what you think in the comments below and don’t forget to check CDL often for the latest “Days of Our Lives” spoilers, updates and news.

To be clear, it’s nothing big, just not the end. Don’t want to be accused of leading you on:) https://t.co/PIXZNScaN2