Days of Our Lives Spoilers: Peter Reckell Hints Bo Return on Twitter – Coming Back or Not Dead? 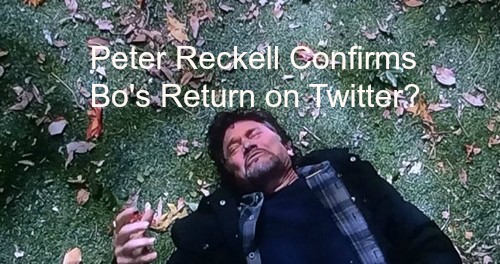 ‘Days Of Our Lives’ (DOOL) spoilers confirmed months ago that Peter Reckell was finally returning to ‘DOOL’ as Bo Brady – casting news indicated that Bo’s big return would coincide with the soap opera’s highly anticipated 50th anniversary celebration and a long-awaited reunion with Hope (Kristian Alfonso).

‘Days’ spoilers and rumors have been teasing for years now that Peter Reckell was returning to Salem – and they finally came to fruition. But, ‘DOOL’ fans had no idea that the writers at ‘Days Of Our Lives’ were bringing Bo back to town for a few weeks – and then killing the character off for good.

The ‘Days Of Our Lives’ cast participated in cast interviews for the 50th anniversary of the NBC soap opera, and Peter Reckell dished on Bo Brady’s big return…and big exit. It’s worth noting that Reckell did not seem to upset about his iconic character being killed off with a brain tumor, as a matter of fact it was quite the opposite – Reckell joked in his interview that the ‘DOOL’ writers “are kicking butt.”

In Peter’s ‘Days Of Our Lives’ interview he discussed his storyline in depth, being kidnapped, rescued, and returning to Salem only to suffer from a brain tumor and have to say ‘goodbye’ to his long-time love interest Hope Brady. For what it is worth, Reckell seemed genuinely sad that his recent stint on ‘Days Of Our Lives’ was rather short lived. Would Peter be willing to put in more time filming? Fan want it, what about TPTB?

Peter explained, “The thing i am so proud of with these writers, especially right now is that they have been able to do that cost-savings and still have a story that is so engaging.  It’s making it a little difficult for me to leave.  I’m like ‘Hey this is fun!’  You know, i am back in the sandbox and I want to play some more.”

Did you watch Peter Reckell and Kristian Alfonso’s heartbreaking final scene on ‘Days Of Our Lives?’ Are you sad to see Peter Reckell go, or is it for the best that TPTB killed off Bo Brady for good – or did they?

Could Peter return periodically on a recurring basis to film scenes that took place during his captivity and absence when he didn’t appear on DOOL? After all the period of Bo’s captivity could hold secrets that matter during the looming Brady-DiMera war. Would you like to see more Bo? Let us know what you think in the comments below and come back to CDL for all your Days of Our lives spoilers and news!

Update: Peter Reckell hinted strongly on Twitter just hours ago that Bo Brady is NOT done on Days!

To be clear, it’s nothing big, just not the end. Don’t want to be accused of leading you on:) https://t.co/PIXZNScaN2