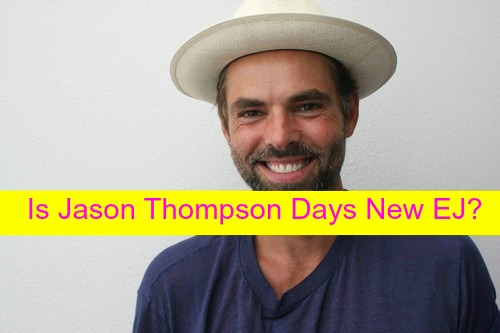 “Days of Our Lives” spoilers tease that Sami (Alison Sweeney) will soon discover information that leads her to believe EJ DiMera (James Scott) is alive. Many viewers are still holding out hope that there will be a surprise EJ appearance for DOOL’s 50th anniversary, but it would likely be brief if that happened.

James Scott has made it clear that he’s pretty much done with soaps at the moment. However, “Days” rumors are swirling about the possibility that we could see EJ with a whole new look down the road.

Jason Thompson, who plays Patrick on “General Hospital,” is said to be departing the ABC soap within a few weeks. Though his exit hasn’t been officially confirmed, Soaps in Depth has a source that claims Thompson is on his way out.

Daytime Confidential is also reporting that a well-loved, established daytime actor is thinking about trading his gig for another iconic role. Could Thompson be headed over to “Days of Our Lives” as an EJ recast? It’s an option that soap fans are buzzing about.

When Scott left the show in 2014, most viewers were upset about EJ’s brutal murder and rushed sendoff. Of course, no one should be too broken up about EJ’s death. Kristen (Eileen Davidson) injected EJ’s body with some type of serum in the morgue, which means we’ll undoubtedly see EJ again someday.

The question is: how soon will it be? If EJ doesn’t pop up for a reunion with Sami before she finishes her stint, then it might be a while before we see the character in any form. DOOL tapes several months in advance and the idea of Thompson taking over is just now floating around.

Nevertheless, EJ is an important character that would be an asset to “Days.” With Andre (Thaao Penghlis) back in the mix and Chad (Billy Flynn) trying to go against the DiMera grain, it would be interesting to see how EJ interacted with his brothers.

EJ could once again be forced to straddle that line of good and evil. On the other hand, Stefano (Joseph Mascolo) loves to whisk people away for a bit of brainwashing. For all we know, EJ could have completely turned to the dark side by now.

Whatever the case, an EJ recast is certainly something to think about. If “Days of Our Lives” is going to replace such a major character, they’d want to bring in someone with experience and solid acting chops. GH’s Jason Thompson might fit the bill. Stick with CDL for updates on any potential casting decisions and other soap news.

So “Days” fans, what do you think about the rumors that Jason Thompson could be brought in as an EJ recast? Would you like to see the character make a comeback? Who else would be at the top of your list of EJ candidates? Let us know what you think in the comments below and don’t forget to check CDL often for the latest “Days of Our Lives” spoilers, rumors, updates and news.