Days of Our Lives Spoilers: Jack Is Back! – Matthew Ashford Returning to DOOL 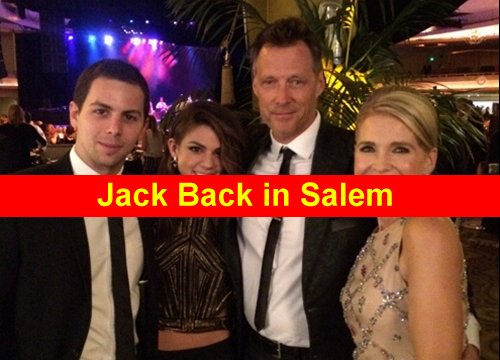 “Days of Our Lives” (DOOL) spoilers reveal that another fan favorite is coming back to Salem. However, there could be a bit of a twist. According to TV Insider, Matthew Ashford will be returning to DOOL as Jack Deveraux.

“Days” fans have been clamoring to get Ashford back on the show since his departure in 2012. Jack was killed off in an elevator crash after heroically saving the life of his daughter, Abigail (Kate Mansi).

Of course, returning from the dead usually isn’t a big problem on a soap. Characters like Stefano (Joseph Mascolo) and Andre (Thaao Penghlis) have bounced back after biting the dust. Unfortunately, Jack may not be quite as lucky.

Ken Corday, the executive producer of “Days of Our Lives,” has insisted that he’s done with resurrections. It’s possible that Corday had a change of heart, but it seems more likely that Jack will show up as a ghost.

After all, we’re seeing a ghostly version of Bo (Peter Reckell) involved in a current storyline. It’s a convenient way to let characters hang out in Salem for a while without a major commitment.

Ashford will only be around for a five-episode stint, which is undoubtedly feeding the buzz behind the ghost idea. DOOL tapes nearly six months ahead, so it’s anyone’s guess where Jack could be inserted in a story.

Perhaps Jack’s spirit will comfort Jennifer (Melissa Reeves) as she deals with an upcoming crisis. Abigail and JJ (Casey Moss) could also need some fatherly guidance in the coming months.

Whatever the case, many “Days of Our Lives” viewers will be happy to see Jack back on their screens for any amount of time. Who knows? There could be more return visits in the future if this one goes well.

Ashford is set to film his scenes during the week of November 30 and his episodes should pop up by late spring. Stick with CDL for updates on what will bring Jack back into the mix.

So “Days” fans, what do you think about the news that Matthew Ashford is returning to DOOL? Have you missed Jack? Will you be satisfied if Jack appears briefly as a ghost?

Let us know what you think in the comments below and don’t forget to check CDL often for the latest “Days of Our Lives” spoilers, updates, and news.