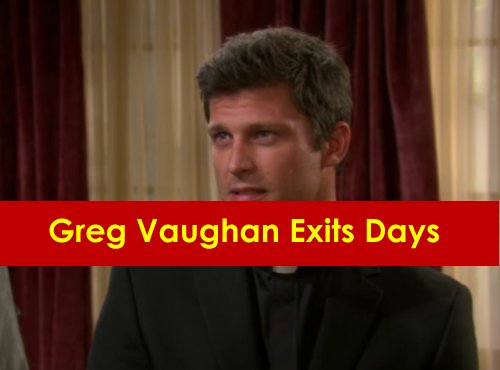 “Days of Our Lives” (DOOL) spoilers indicate that Eric Brady portrayer Greg Vaughan is exiting Days for good. It was just a few months ago, in August, that Vaughan tweeted that he had inked a contract extension saying “Great day today! Official contract extension @DaysofourLives.”

But now it looks like Vaughan is leaving the show, according to Serial Scoop. Seems that the extension he signed was not a long-term deal but just a short-term gig to wrap up Eric Brady’s storyline before Vaughan moved on to other projects.

Many fans expected Vaughan to carry on with Eric until at least 2016, so this will be a shocker to many. But it was at Vaughan’s request that his character will be written out so he can pursue other work. Fans have long enjoyed Vaughan’s prolific career on both prime time and daytime TV.

Aside from “Days of Our Lives” Vaughan portrayed Lucky Spencer on “General Hospital” for six years and had a brief stint on “The Young and the Restless” as Diego Guttierez. Vaughan was also on Charmed and Beverly Hills 90210 among other prime time series.

If you need more of a Vaughan fix, you can also check him out on The Hallmark Channel holiday movie “The Christmas Note” which premiered this week. There’s no doubt that Vaughan is a versatile actor – as his portrayal of Eric Brady has clearly demonstrated.

After Eric Brady returned to Salem as a priest, he was drugged and molested by Kristen DiMera (Eileen Davidson). The emotional fallout from this experience allowed Vaughan to really showcase his acting chops as the traumatized Eric who descended into drunkenness and gave up his collar.

Fans had speculated in the past that Eric Brady would be a victim of the latest serial killer to terrorize Salem, but the extension Vaughan signed quelled that rumor at the time. But now we have to wonder will it be Eric’s boozing that takes him out, or the serial killer, or if he’ll just flee Salem for good.

Stay tuned to CDL for more details on Vaughan’s departure from DOOL and lots more “Days of Our Lives” spoilers, gossip and more.