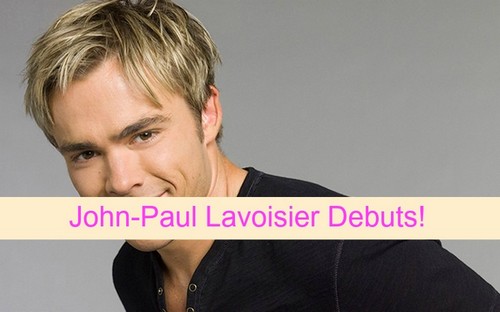 “Days of Our Lives” (DOOL) spoilers tease that John-Paul Lavoisier debuts as Philip Kiriakas on Thursday, December 10. There may be some fireworks because John-Paul’s screen test was with Jen Lilley (Theresa Donovan). Will there be a Philip and Theresa romance?

Philip left Salem to attend to business at other Titan Industries locations. But Brady Black (Eric Martsolf) is no longer with the company and Philip is returning to Titan’s home base on Victor Kiriakis’s (John Aniston) orders.

Brady isn’t all that thrilled with Victor right now, but the young man still loves his grandfather. Brady must be suspicious of Philip’s motives – both professional and personal.

Does Philip have his eyes on Brady’s lady Theresa Donovan? According to an interview in a recent issue of Soap Opera Digest John-Paul revealed that when he signed on with “Days of Our Lives” he tested with Jen. The test scene involved a somewhat of power struggle, but Lavoisier noted that there were some definite sexual overtones during the screen test.

Will Ms. Donovan be tempted by the handsome and charming Philip Kiriakis? Will Philip’s return to Salem spell the end for Teresa and Brady? Teresa fought hard to win Brady’s heart – is she going to mess everything up by falling in love with Philip?

“Days” fans know Victor has never liked Teresa. In fact, the great Victor Kiriakis forced Brady to choose between Titan Industries and Teresa. Now he has ordered Philip back to Salem to take over where Brady left off. Will Victor interfere once again, perhaps pushing Teresa and Philip together?

Philip and Belle Black (Martha Madison) have a history and there could be some romantic sparks there also. Belle is estranged from husband Shawn Brady (soon-to-be Brandon Beemer). Could Belle and Philip find themselves rekindling those romantic feelings?

“Days of Our Lives” fans do you think Philip’s return to Salem will make things difficult for Teresa and Brady? Does Victor have plans to push Philip and Teresa together? Or will Belle and Philip find themselves back together?

Let us know what you think in the comments section below and come back to CDL for all your “Days of Our Loves” spoilers and news.