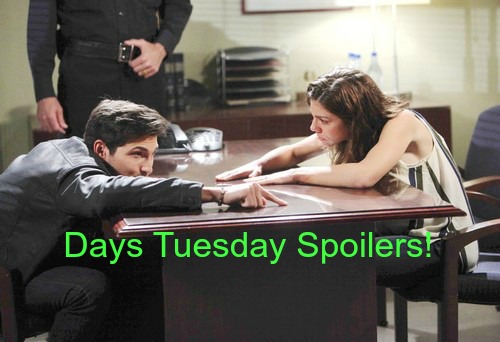 “Days of Our Lives” spoilers for Tuesday, December 8, tease that Abigail (Kate Mansi) will beg Ben (Robert Scott Wilson) to tell her where he took her son. Unfortunately, Ben won’t be very cooperative. Ever since Lani (Sal Stowers) and JJ (Casey Moss) took Ben into custody, he’s been acting pretty spaced out.

It’s possible that Ben has really lost it, but it seems more likely that he’s trying to set up an insanity defense. Whatever the case, Abigail will find it difficult to pull information out of her ex-fiancé.

Nevertheless, Abigail will manage to get a crucial clue when Ben reveals he left the child at a motel. It sounds like Abby will be one step closer to reuniting with her son, but can she locate him before tragedy strikes? The baby is a preemie and he’s in desperate need of medical attention. Chad (Billy Flynn) and Abigail will have to race against the clock if they hope to bring her little one home alive.

Meanwhile, Eduardo (A Martinez) will spend some time getting to know Kate (Lauren Koslow). There’s obviously a mutual attraction and a casual date might be the perfect way to move this along. “Days” spoilers indicate that they’ll open up to each other as they try to get acquainted. DOOL viewers will be anxious to see if love will bloom for Kate and Eduardo in the coming months.

After chatting with Kate, Eduardo will be surprised by a visitor. “Days of Our Lives” spoilers say John (Drake Hogestyn) will have some questions that only Eduardo can answer. Thanks to Paul’s (Christopher Sean) tip, John knows that Eduardo has a connection to Winterthorne Academy. Perhaps Eduardo can help John find out more about his past.

Other DOOL spoilers suggest that Hope (Kristian Alfonso) will hold nothing back as she grills Dr. Malcolm (Adam Leadbeater). Now that Hope is on leave from the police force, she feels she doesn’t have to play by the rules. A desperate woman does desperate things.

Still, Dr. Malcolm will try to squeeze some cash out of Hope in exchange for the info she’s seeking. Hope will eventually take the deal she’s offered, but their agreement will take a wrong turn later this week. Stick with “Days of Our Lives” for updates on Hope’s search for the truth.

So “Days” fans, what do you think about Ben’s news for Abigail? Will Abby find the right motel before it’s too late? Do you like the idea of Kate and Eduardo as a pairing? Will Hope learn who Dr. Malcolm is working for? Let us know what you think in the comments below and don’t forget to check CDL often for the latest “Days of Our Lives” spoilers, updates and news.