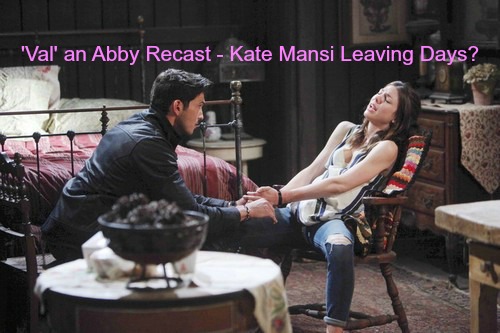 “Days of Our Lives” spoilers tease that DOOL is adding a cast member. According to Soap Opera Digest, “Days” is casting the contract role of “Val.” Val is a 25-year-old Caucasian female and of course, she’s gorgeous. That’s always a soap requirement. The casting call goes a little deeper by describing Val as “passionate, intelligent and sensitive.”

The description also states that Val “blows into town in a whirlwind.” Val seems successful and people think she’s really got her act together. However, Val is much more fragile and vulnerable than others realize. The casting call hints at the possibility of pain in this young woman’s past, but Val would obviously like to keep that buried.

It’s good that “Days of Our Lives” is on the hunt for another leading female for the 20-something crowd. DOOL rumors suggest that Kate Mansi might be leaving the role of Abigail in the near future. That means they may need to fill the void.

In fact, there’s been speculation that “Val” is actually code for an Abigail recast. If producers feel certain that Mansi is headed out, they may have given the greenlight on the search for a new Abigail. Most of the info listed would definitely fit the bill. The rest could be tossed in there to throw fans off.

Character names are often changed in casting calls so they can keep departure news under wraps. There were calls for Danielle, Mason and Elijah back in the spring. Those characters turned out to be SORAS’d Ciara (Vivian Jovanni), Chase (Jonathon McClendon) and Theo (Kyler Pettis). On the other hand, Lani (Sal Stowers) turned out to be a brand-new role. It appears this casting call could go either way.

Whatever the case, we’ll soon have a fresh face in Salem to add to the drama. The actress who secures the part will begin taping in December and she should show up on screen by May. We’ll give you updates as we learn more details. Stick with “Days of Our Lives” to see what the newbie will look like.

So “Days” fans, what do you think about the casting call that recently went out for Val? Could this be a disguised description for an Abigail recast or is this a straightforward search for a new role? Are you glad DOOL is expanding the 20-something group? Let us know what you think in the comments below and don’t forget to check CDL often for the latest “Days of Our Lives” spoilers, rumors, updates and news.