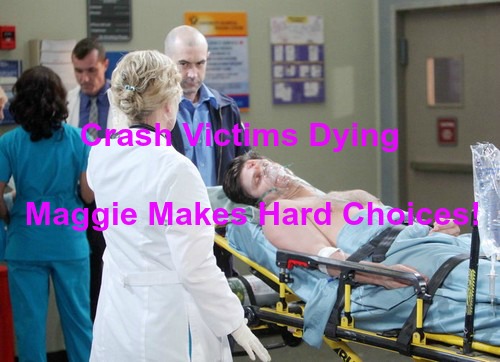 “Days of Our Lives” spoilers for Monday, January 4, tease that Chad (Billy Flynn) will have a hard time wrapping his head around Abigail’s (Kate Mansi) bombshell. Abby just spilled the news that Chad is Thomas’ father, but it looks like she’ll need to provide some evidence to get brainwashed Chad on board with the idea.

Nevertheless, Chad will soon be forced to face the facts and it will lead to a major revelation later this week.

Meanwhile, Belle (Martha Madison) will declare that she’s done with Chad and his relationship turmoil. Obviously, the situation between Chad and Abigail is far from resolved. The last thing Belle needs is to get caught in the middle of this baby drama.

She has enough problems already. Instead, Belle will likely focus on Philip (John-Paul Lavoiser) as she tries to move on with her life. DOOL spoilers hint that this friendship could turn into a rekindled romance down the road.

Other “Days of Our Lives” spoilers reveal that we’ll see doctors work frantically to save the victims of the New Year’s Eve car crash.

It should be difficult for the hospital to deal with losing one of their own. It will be even tougher for Maggie (Suzanne Rogers) to handle this crisis, especially since Daniel’s fate will lie in her hands. “Days” spoilers indicate that Maggie will have to make a choice that will affect at least two of the critical patients.

Perhaps Maggie will have to let go of a potentially brain-dead Daniel for the sake of one or more of the others.

Whatever happens, you can bet that everyone gathered at the hospital will be in a state of shock. This was not how they expected to cap off their festive night. Suddenly, a three-car pileup has changed everything.

How will these DOOL characters get through this time of great sorrow and loss? Stick with “Days of Our Lives” for updates on the heartbreaking scenes ahead.

So “Days” fans, what do you think about Abigail’s efforts to prove she’s telling the truth about Thomas’ paternity? How will Chad react to the news? Will Maggie have trouble making her decision? Will there be any regrets about what comes next?