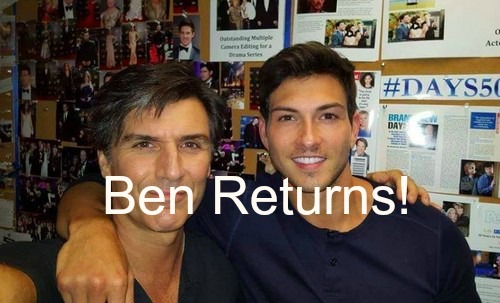 “Days of Our Lives” spoilers reveal that Ben’s (Robert Scott Wilson) story may not be over just yet. This killer and all-around nutjob was finally locked up, but Ben could still find a way to wreak havoc in the coming weeks. In an interview with Soap Opera Digest, Wilson hinted that Ben might have a few surprises in store.

“When something traumatic like that happens, that person always stays with you, the experiences haunt you,” said Wilson. “You can’t shake it off just because someone goes to jail.” Wilson went on to say, “Because of that, there may be some presence of Ben along the way.”

Soapcentral.com also tried to get to the bottom of Wilson’s status at “Days of Our Lives.” When asked if he was still at DOOL or not, Wilson replied that it was “a little bit of both.” It seems Ben will show up in some form pretty soon. “Maybe he’s gone and then he’s back and then he’s gone. Maybe he’s just among us. Maybe he’s just something that you can’t get rid of,” said Wilson.

So what does all of this mean? There are several possibilities for Ben’s return. Ben could escape from jail and as a result, there would always be a lingering threat for Chad (Billy Flynn) and Abigail (Kate Mansi). Another option would be for Ben to appear in Abigail’s nightmares. Perhaps “Days” shot new scenes of Ben to use in Abby’s hallucinations.

We should point out that Ben is on suicide watch in the slammer. The guards in Salem are notorious slackers, which means it’s entirely possible that Ben could kill himself while his assigned officer is dozing or getting a doughnut. If Ben ends up dead, he might haunt Abigail as a ghost.

Whatever the case, DOOL viewers will want to keep an eye out for Ben in the near future. Vincent Irizarry, who will soon be playing a new character named Deimos, tweeted out a photo with Wilson on September 30.

It looks like these “All My Children” alums were both filming around then (though they were probably in unrelated scenes). Irizarry is set to debut in his Kiriakis-connected role in January and Ben may resurface around that time as well. Stick with “Days of Our Lives” for updates on how Ben could continue to torment Chad and Abigail.

So “Days” fans, what do you think about the news that Ben will likely return? Do you believe Ben will escape or possibly show up as an apparition? How might Abigail react to seeing Ben once again?