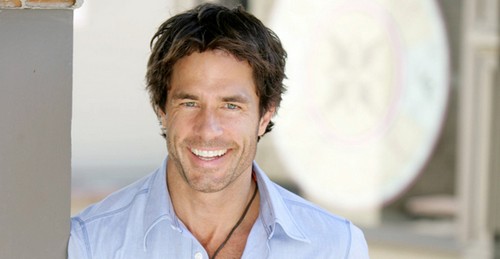 “Days of Our Lives” spoilers tease that another death will rock Salem, Dr. Daniel Jonas, but this one won’t come at the hands of the necktie serial killer. According to Serial Scoop, Shawn Christian has wrapped up his time as Daniel Jonas. Dr. Dan has some strong supporters out there, but most DOOL viewers agree that he’s been overused and is typically painted as a bit preachy. Saint Daniel usually seems to be the hero, which makes us wonder if he’ll die a hero as well.

“Days” rumors hint that there could be a disaster storyline in the works. Daniel may try to save someone and get himself killed in the process. There’s also a chance that Daniel could develop some sort of illness that causes his demise. Of course, there’s always the possibility that the writers are choosing to take the character in another direction entirely. Maybe Daniel isn’t murdered by the serial killer because he IS the serial killer. Daniel could be killed in a shootout at the end of his spree.

“Days of Our Lives” spoilers say that the big reveal is going to be shocking. What would be more shocking than the typically heroic doctor turning into a coldhearted killer? Perhaps Daniel is much more sinister under the surface. Dr. Dan could be a saintly surgeon by day and deathly killer by night. If Daniel has dissociative identity disorder, he might not even realize he’s been murdering people.

Then again, maybe the first two murders were committed by someone else, but the killings will send Daniel on a murderous rampage of his own. After all, Daniel knew Serena (Melissa Archer) and he was actually quite close to Paige (True O’Brien), who used to babysit Parker (Evan and Luke Kruntchev). Word has it we could see some copycat murder attempts in Salem down the road.

Whatever happens, it’s sure to be a difficult situation for Nicole (Arianne Zucker). DOOL spoilers indicate that we’re in for several heartbreaking scenes. Fortunately, Daniel’s death could pave the way to the “Ericole” reunion many viewers are hoping for. Eric (Greg Vaughan) and Nicole are expected to grow closer over the next few months, which means he could help pick up the pieces of her broken heart. Stick with “Days of Our Lives” for updates on the intense drama to come.

So “Days” fans, what do you think about the news that Shawn Christian is out at the NBC soap? Will you miss Daniel or are you glad the character is being killed off? Let us know what you think in the comments below and don’t forget to check CDL often for the latest “Days of Our Lives” spoilers, rumors, updates and news.