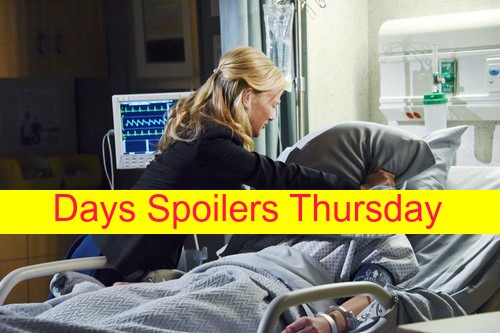 “Days of Our Lives” spoilers for Thursday, October 15, tease that Sonny (Freddie Smith) will finally arrive back in Salem. Sonny is still reeling from the devastating news of Will’s (Guy Wilson) death, but he’ll have some support once he gets home. DOOL spoilers say Justin (Wally Kurth) and Adrienne (Judi Evans) will try to be there for their son during this difficult time. You can expect several emotional scenes as this family reunites under tragic circumstances.

Across town, John (Drake Hogestyn) will focus on his past. It’s probably good for John to keep his mind off all the sadness right now. It seems Paul (Christopher Sean) will decide to help his dad out. “Days of Our Lives” spoilers indicate that John will team up with Paul to learn more about his history.

After all, they’re both interested in learning who John actually is and where he came from. John recently got a few solid leads and he’s hoping they’ll guide him to the truth. “Days” rumors hint that this storyline will take some time to play out, but the payoff may be worth it in the end.

Meanwhile, Sami’s (Alison Sweeney) grief will cause her lash out in dangerous ways. Dangerous for Chad (Billy Flynn), that is. DOOL spoilers reveal that Sami will try to smother Chad with a pillow. Marlena (Deidre Hall) will stop Sami before she finishes the job.

Poor Chad has been through so much lately. Chad’s had three murders and an attack pinned on him. Then, Ben (Robert Scott Wilson) beat Chad into a coma. Now Sami’s stepped her to inflict her wrath.

Let’s hope Chad’s streak of bad luck will wrap up soon. Until then, Stefano (Joseph Mascolo) will have to watch and wait. Chad is in bad shape, but Stefano will make a tearful appeal to his son. Perhaps Stefano will vow to be a better father if Chad will just return to him.

Of course, Stefano tends to make bargains like these whenever his children are knocking on death’s door. We all know Stefano will never really change, but that’s part of why we love him. Stick with “Days of Our Lives” for updates on Stefano’s reaction to Chad’s condition.

So “Days” fans, what do you think about Sonny’s return to Salem? Can Paul help John figure things out? Will Sami believe Marlena’s doubts about Chad’s guilt? Will Stefano realize what he stands to lose? Let us know what you think in the comments below and don’t forget to check CDL often for the latest “Days of Our Lives” spoilers, rumors, updates and news.