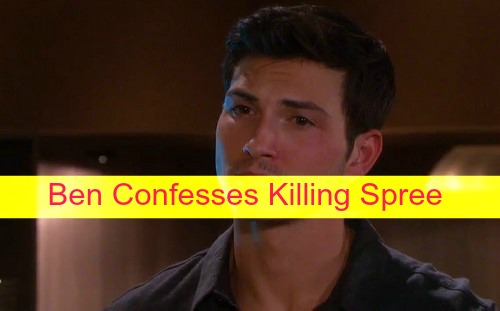 “Days of Our Lives” spoilers reveal that Ben (Robert Scott Wilson) is about to let someone in on a very big secret. So far Ben is the only one who knows about his killing spree, but that’s going to change in the near future. DOOL spoilers say Ben will confess that he’s the behind the recent murders.

The question is: who will Ben confide in? You can bet that it won’t be Rafe (Galen Gering) or anyone else with the Salem PD. That would effectively end Ben’s run. This storyline still has plenty of gas left in the tank.

Instead, Ben will confess to someone close to him. “Days” spoilers tease that Abigail (Kate Mansi) will continue to be torn about whether or not Chad (Billy Flynn) is the guilty party. That means Abigail won’t get a clue just yet.

When Ben killed Will (Guy Wilson), he basically got rid of the only friend he had in town. So who does that leave? Ben may turn to the person he’s been confiding in for months: his father, Clyde (James Read). That’s right. “Days of Our Lives” spoilers confirm that we haven’t seen the last of the hillbilly drug lord. James Read’s final airdate is still to come. Clyde is currently in jail, but it sounds like he might be out soon enough.

It’s possible that Clyde will make bail or even find a way to get the charges dropped. Perhaps Ben will feel the walls closing in and he’ll ask his father for help. Of course, there may be another option for Ben’s confidant. Ben nearly killed Chad in that brutal brawl and he might need some legal representation. Aiden (Daniel Cosgrove) swore off defending the Westons, but he might have a change of heart if Clyde gets out of the slammer.

It’s tough to believe that Clyde and Ben would really want to work with Aiden again after he double-crossed them. However, Aiden is pretty much the only lawyer in Salem so maybe they’ll all have to make do.

In addition to any Clyde drama that might arise, Aiden will have a lethal plan on his mind. We’ve already seen Aiden toying around with the idea of killing Hope (Kristian Alfonso) for her money. “Days of Our Lives” rumors hint that the plot’s about to move full-speed ahead.

DOOL’s 50th anniversary promo shows us that Hope will be the victim of an attack and she’ll stab the perpetrator in self-defense. As of right now, three suspects seem to be emerging: Ben, Clyde and Aiden. Which one will it be? There are several scenarios that could play out. Ben or Clyde could easily come after Hope for revenge on Aiden. Nevertheless, it’s looking more and more like Aiden will attempt the deadly deal. Stick with the NBC soap for updates on the danger that’s looming.

So “Days” fans, what do you think about the news that Ben will make a confession? Will Ben admit the truth to Clyde, Aiden or someone else? What about the upcoming attack on Hope’s life? Who will be Hope’s attacker? Let us know what you think in the comments below and don’t forget to check CDL often for the latest “Days of Our Lives” spoilers, rumors, updates and news.