Days of Our Lives (DOOL) Spoilers: Steve Reunites with Bo, Our Heroes Escape – Try to Get Home to Stop Hope’s Wedding 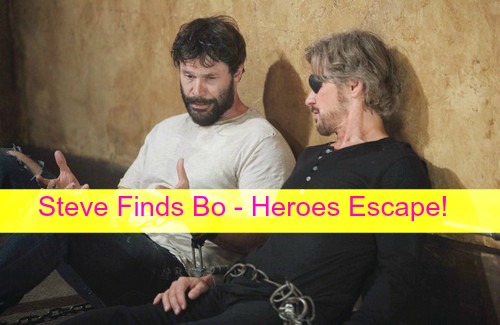 “Days of Our Lives” spoilers tease that Steve (Stephen Nichols) will decide he can’t give up on Bo (Peter Reckell) just yet. Though Steve believes Bo is dead, Caroline’s (Peggy McCay) visions are awfully intriguing. Steve is starting to realize that Caroline’s dreams could lead him to his pal.

When we last saw Bo, he broke free from his captors and shouted that he was going home. Alas, there will be a slight delay on those plans. It appears Bo will be detained once again.

DOOL spoilers say Steve will return to Mexico to track down the medical facility Caroline described. It seems Steve will locate it, but he’ll also find a few thugs who won’t be pleased to learn he’s still digging around. Bo and Steve will be shackled and locked in a room together.

At least Bo won’t be alone this time. Steve will be happy to discover his friend is alive and they’ll have an opportunity to catch up while they’re imprisoned. Unfortunately, Steve will have to pass along some disappointing news.

“Days of Our Lives” spoilers reveal that Steve will tell Bo about the new man in Hope’s (Kristian Alfonso) life. When Hope thought Bo abandoned her, she felt she had no choice but to move on. Now Hope’s in love with Aiden (Daniel Cosgrove), but Steve is convinced there’s something decidedly off about him.

Bo’s been dreaming about Hope being in danger and it looks like his hunch is correct. “Days” rumors suggest that Hope will be the victim of an attack by a disguised intruder. Aiden could be the man behind the mask.

Regardless, Steve wants to help Bo get back to Salem before Hope gets hitched. Bo and Hope are soulmates in the eyes of many DOOL viewers. Hope obviously cares deeply for Aiden, but that relationship is about to crash and burn. Besides, Hope’s love story with Bo is incomplete.

This supercouple deserves the proper closure. Will Bo and Steve be able to fight off their captors to return home? “Days of Our Lives” spoilers say they’ll make it back safely, but it’s not clear if they’ll resurface before Hope ties the knot.

It’s possible that we could see history repeat itself if Bo swoops in to steal Hope from the ceremony. In 1984, Bo kidnapped Hope on a motorcycle to stop her from marrying another man. Peter Reckell has said in interviews that there would be a motorcycle sighting at some point during his stint. However, it may not be right away. Kristian Alfonso has hinted that it might take Hope a while to reconnect with her true love, especially now that half of her heart belongs to Aiden.

Of course, everything’s going to change when Aiden is exposed as a dirty rotten scoundrel. Maybe Bo and Hope will get a chance to take that joyride after all. Better late than never! The excitement is sure to be kicked up a notch for November sweeps. Stick with the NBC soap for updates on Hope’s romantic adventure.

So “Days” fans, what do you think about Steve being held in captivity with Bo? Are you looking forward to their scenes together? What about Hope’s upcoming wedding? Will Bo make it back in time to stop Hope from making a big mistake? Let us know what you think in the comments below and don’t forget to check CDL often for the latest “Days of Our Lives” spoilers, rumors, updates and news.