Days of Our Lives Spoilers: Marie Wilson Returns to DOOL in New Role of Summer, a Passionate and Slightly Unstable Loner 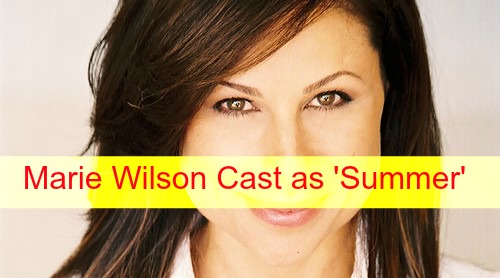 “Days of Our Lives” spoilers reveal that DOOL viewers will soon see a familiar face with a new name. Serial Scoop is reporting that Marie Wilson is returning to “Days,” but she won’t be reprising her role as Bree Tjaden. If that name isn’t ringing a bell, don’t worry.

It was a rather forgettable character who tried to convince Hope (Kristian Alfonso) she should be wary of Aiden (Daniel Cosgrove). Hope went back and forth on believing the accusations, but we now know Bree wasn’t so crazy after all. Nevertheless, Wilson’s next character could be leaning in that slightly unstable direction.

DOOL spoilers say Wilson will be playing the part of Summer, “a passionate loner who’s been in and out of institutions.” Summer’s also known to be a bit of a thief, which will likely come up at some point during her stint. When the casting call went out, this was listed as a short-term contract role.

It seems Summer won’t be a major player on the “Days of Our Lives” landscape, but she may provide another character with a meaty story. Perhaps Marlena (Deidre Hall) will be Summer’s therapist. Marlena always tries to help anyone she can.

Whatever the case, Summer sounds intriguing and her portrayer has quite the resume. Wilson played Karen Wexler on “Port Charles” as well as Meg Synder on “As the World Turns.” However, Wilson’s acting experience isn’t limited to soaps. You might have seen Wilson featured in “Criminal Minds” or “The Bay.” Wilson even snagged an Indie Series Award nomination in 2012 for “Workshop.”

In addition, it says a lot that DOOL wanted Wilson back in a new part. The show obviously recognizes Wilson’s talent and wants to see more of it. Recasting actors and actresses for other roles usually works out just fine. We recently saw Paul Telfer go from Victor’s (John Aniston) henchman, Damon, to the ruthless Xander Cook (aka Alexandros Kiriakis). The rumors hint that exciting storylines are headed your way next year. Summer is set to debut on screen by early 2016. Stick with “Days of Our Lives” for updates on the trouble Summer will stir up.

So “Days” fans, what do you think about the news that Marie Wilson has been cast as Summer? Did you enjoy Wilson as Bree? Are you looking forward to seeing Wilson take on a much different character? Let us know what you think in the comments below and don’t forget to check CDL often for the latest “Days of Our Lives” spoilers, rumors, updates and news.