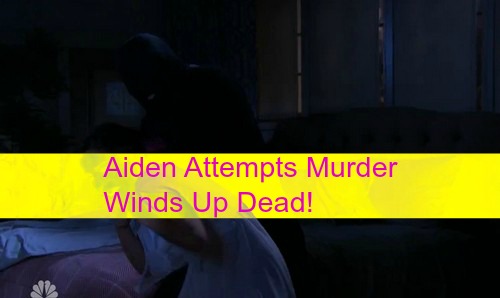 “Days of Our Lives” spoilers tease that Aiden (Daniel Cosgrove) is about to take a very dark turn. We’ve already seen a major shift in Aiden’s character over the last couple of months. Aiden once appeared to be a doting boyfriend, but it quickly became evident that he had a hidden agenda.

Of course, Aiden’s always been a man of many secrets. We can’t forget that Aiden lied to Hope (Kristian Alfonso) about his dead wife. Aiden originally claimed she killed herself, but he later changed his story. Now Aiden insists that Chase (Connor Kalopsis) accidentally shot his mother.

In reality, Aiden probably did the deed himself and he might intend on murdering soon-to-be wife number two. DOOL viewers know that Aiden’s been examining the life insurance policy with dollar signs in his eyes.

Andre (Thaao Penghlis) suggested a deal to pay off his debts, but Aiden had some reservations. Aiden would have to swipe all of the Salem PD’s info on Chad (Billy Flynn) and the DiMeras could easily hold that illegal act over his head. Rather than facing blackmail indefinitely, Aiden would prefer a clean break.

As it turns out, Aiden may be able to score a hefty check and please Stefano (Joseph Mascolo) at the same time. “Days of Our Lives” spoilers say Stefano and Andre will support the idea of killing Hope. In fact, they’ll pressure Aiden to go through with it.

Aiden was hired to make Hope forget all about Bo (Peter Reckell), but maybe Stefano has decided she needs to be eliminated entirely. Whatever the case, it sounds like a murder attempt is rapidly approaching.

As luck would have it, there’s currently a serial killer on the loose in Salem. Aiden has the perfect opportunity to commit murder without getting caught. Chad is facing charges and Ben (Robert Scott Wilson) is the true killer, but no one will know the difference when Aiden makes his move. If Aiden wears a mask and uses a necktie, he could divert suspicion away from himself and onto the recent strangler. However, things may not go according to plan.

DOOL’s 50th anniversary promo shows us that there will be an attempt on Hope’s life. A masked intruder will come after Hope and she’ll grab a nearby knife or letter opener to protect herself. It seems Hope will kill her attacker in self-defense. If the masked man is revealed to be Aiden, everyone might assume Aiden’s been doing the killing all along.

You shouldn’t worry about Ben getting off scot-free though. Abigail (Kate Mansi) will get a clue that her fiancé isn’t exactly a boy scout. There should be some tension for the once happy couple. “Days” rumors hint that Ben could kidnap Abigail in a desperate effort to hang onto the girl of his dreams.

When all of this is over, the truth will come out and Ben will most likely end up in jail. Still, Salem will never be the same now that Ben has left his deadly mark. Aiden isn’t any better if he’s willing to kill Hope for her money. Stick with “Days of Our Lives” for updates on the tragic fallout of Ben and Aiden’s despicable actions.

So “Days” fans, what do you think about the news that Stefano and Andre will be on board with Aiden’s plot to murder Hope? Is Aiden the one who comes after Hope in the promo? Will the cops blame the killing spree on the wrong man? Let us know what you think in the comments below and don’t forget to check CDL often for the latest “Days of Our Lives” spoilers, rumors, updates and news.