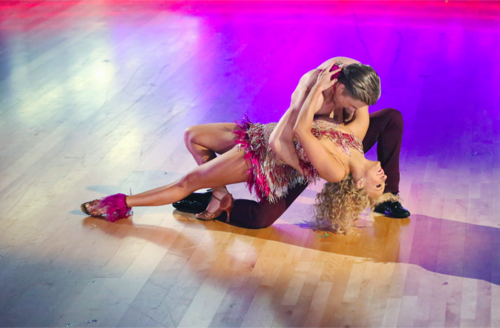 Dancing With The Stars couple Derek Hough and Nastia Liukin have been burning up the dance floor with their undeniable chemistry on the ABC dancing competition. Derek and Nastia were recently spotted hanging out in between rehearsals and spurred rumors that the dance partners are dating. Despite the obvious sparks between the pro dancer and Olympian, Nastia Liukin actually has a boyfriend – Matt Lombardi, but at this rate they could break up before the show wraps.

Nastia Liukin and Matt Lombardi’s relationship has been strained by her decision to join Dancing With The Stars. Although Nastia is totally dedicated to her boyfriend, he is not a fan of the hot chemistry she shares with Derek or all of the rumors on the Internet that she is hooking up with her dance partner. Matt’s jealousy is taking a toll on the DWTS competitor and sources say that he is just driving her away – and possibly even straight in to the arms of Derek Hough!

CDL spoke to a Dancing With The Stars insider who dished on the messy love triangle between Matt Lombardi, Nastia Liukin, and Derek Hough. Our source explained, “Nastia loves Matt and she would never cheat on him. But, he is so jealous of her and Derek that it is driving a wedge between them. It really bothers her that Matt doesn’t trust her. Ironically, his constant hovering and questioning about Derek is just making her and her dance partner closer.”

It seems like every season of Dancing With The Stars – couples emerge left and right. So, we totally get why Matt Lombardi would be so paranoid. But, smothering Nastia clearly is not the answer. Matt’s paranoia is just pushing her closer to Derek (not that we’re mad because they are super cute together). What do you think Dancing With The Stars fans? Do you think Nastia will stick with her jealous boyfriend, or do you think they will break up before the season is over? Let us know what you think in the comments below!