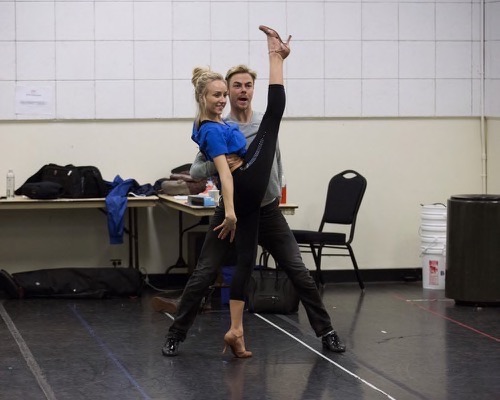 Are Dancing With The Stars partners Derek Hough and Nastia Liukin dating? So far there have been new shomances and relationships popping up left and right on Season 11 – and now the media has turned their attention to pro dancer Derek Hough and his DWTS 2015 partner Nastia Liukin. Derek and Nastia were spotted out on a lunch date together on April 3rd – instantly spurring dating rumors and speculation that they were more than just dance partners.

According to OK! Magazine when Nastia and Derek were spotted together in New York City, “their bite to eat seemed more romantic than friendly when they were spotted laughing their way out of the restaurant!” Derek Hough was last linked romantically to actress Kate Hudson, but she has since moved on and is dating Gwyneth Paltrow’s husband Chris Martin – so Derek Hough is technically single and ready to mingle. Nastia on the other hand is not, and the Olympian is in a relationship with long-time boyfriend Matt Lombardi.

Matt Lombardi and Nastia Liukin have a pretty solid relationship, but according to insiders at Dancing With The Stars – her relationship has been under some stress since she partnered up with Derek Hough. A spy dished to CDL, “Nastia would never cheat on Matt. But, it is really hard for him to sit back and watch her dance all over the stage with Derek every week. And, their rehearsal times are cutting in to time that Matt wants to spend with Nastia. His jealousy is starting to really show.”

It seems like every couple on Dancing With The Stars is rumored to be dating or hooking up, so we can’t even say that we blame Matt Lombardi for being jealous of Nastia and Derek. Do you think that Nastia would ever cheat on her boyfriend with Derek Hough? Or is Matt just being paranoid? Let us know what you think in the comments below!