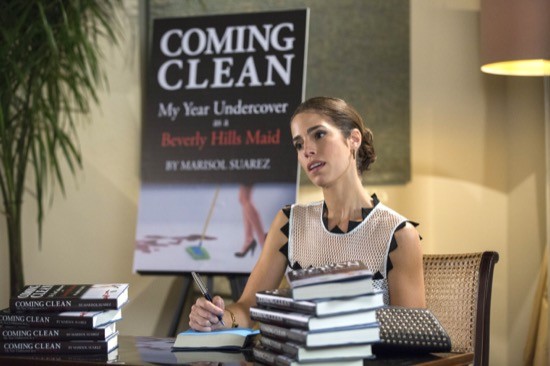 Tonight on Lifetime DEVIOUS MAIDS continues with an all new Monday June 1 episode called, “Awakenings.” On tonight’s episode season 3 begins with the aftermath of a shooting at Rosie and Spence’s wedding that changes some lives forever.

For those of you who don’t know, executive produced by Marc Cherry and Eva Longoria, Devious Maids follows five maids with ambition and dreams of their own while working for the rich and famous in Beverly Hills. Devious Maids is set in a world where murder and mayhem collide in the mansions of Beverly Hills’ wealthiest and most powerful families.

On tonight’s episodes per say the Lifetime “season 3 begins with the aftermath of a shooting at Rosie and Spence’s wedding that changes some lives forever. Meanwhile, a familiar couple return to Beverly Hills with their new, mysterious daughter.”

Tonight’s episode is going to be another fun one, which you won’t want to miss. So be sure to tune in for our live coverage of Lifetime’s Devious Maids Season 3 premiere— tonight at 10PM EST! While you wait for the episode, share your comments about season 3 of Devious Maids below.

Tonight’s episode of Devious Maids picks up where we left off last season, Spence and Rosie have just gotten married in the church. The wedding party rushes outside with the new bride and groom – a man in a mask drives by and fires shots at the crowd in front of the church. The pastor, Valentina’s father Pablo, and Rosie are all shot. Rosie drops to the ground, her wedding dress is covered in blood.

Rosie wakes up in her hospital bed and Marisol, Carmen, and Zoila are standing over her – they break the news to her that she has been in a coma for the last four months. They reveal to Rosie that Zoila’s husband Pablo died after he was shot. Marisol changes the subject and says that her book was just released. Carmen rants that now Marisol is BFF’s with Evelyn Powell. Marisol points out that Carmen has been dating a married man. Spence arrives with Rosie’s son and they rush to her bed to greet her.

Valentina returns home and finds Remy sitting there waiting for her – she explains that she went to the cemetery to see her father’s grave. Remy has a gift for Valentina, she opens it – and is not thrilled when she sees that it is just a can of pepper spray. Remy wants her to carry it with her to protect herself.

Marisol heads out to lunch with Evelyn Powell, and another one of their friends. They beg Marisol to come to the Barney’s sale with them. Marisol whines that they should spend their days doing something more meaningful, she admits that Carmen called her “frivolous.” Evelyn scoffs that she can’t listen to Carmen – Marisol is successful now and Carmen is just a maid, and she is jealous. Evelyn is planning the book-signing party, she asks Marisol if her “maid friends” will be coming.

Carmen heads home to her boyfriend, the married real estate agent. She rants to him about her conversation with Marisol, Carmen asks Sebastian if he is just giving her the house to live in so that they can have sex. Sebastian insists that he is committed to Carmen and cares about her – and the house is a symbol of that.

Genevieve is drinking at her house while Zoila cleans the kitchen. She jokes that Zoila looks fatter every day. Zoila confesses that she is pregnant, but no one knows because she doesn’t know if Javier is the father or Pablo. She hasn’t been able to do a DNA test because Javier has been away on business. He gets back this week and she is going to do the test and find out. Genevieve promises to keep her secret.

The next day Zoila, Marisol, and Carmen head out to lunch – Zoila brings along her friend Blanca and introduces her to the girls. Blanca reveals that she was working as a maid, but her boss fired her because she wanted to change her hours to go to college part-time. Marisol says that the Stepford Family just moved back in to town, and she is going to recommend Blanca to them.

Adrian and Evelyn head to therapy to discuss their “problems in the bedroom.” The therapist thinks that the reason Adrian has no sex-drive might be because they have stopped arguing, and all of the fighting used to turn them on. Meanwhile at Genevieve’s house, she and Zoila are plotting – Zoila is going to rip out 10 strands of Javier’s hair to do the DNA without him noticing. Javier arrives at the door and Zoila hugs him and manages to pull out some of his hair and slip it in to an envelope.
At the hospital, Spence reassures Rosie that he has gotten a movie role and he got a nice apartment for him and Miguel to live in while she was in a coma. After Spence leaves, a nurse comes in and shows Rosie a video on his phone of Spence, and he’s naked. Apparently, Spence is naked in every scene of his new movie.

Blanca is hired by Taylor and Michael Stepford. On her first day at the job, Michael is screaming at their daughter Katie for ruining his paperwork. They head to the book signing for Marisol and leave Katie with Blanca. After her parents are gone Katie tells Blanca that she and her mom don’t love her dad. At Genevieve’s house, Zoila gets the phone call for the DNA test results – she cries when she hears that Javier isn’t the father. She is pregnant with Pablo’s baby.

Rosie confronts Spence about the movie and the nudity – he shouts that he had to support his family. Rosie understands, and sympathizes for him. She knows it must have been very hard for him to film those scenes. Remy and Valentina are a mess. Valentina goes for a jog – and Remy follows her to make sure that she is okay. When Val realizes someone is following her, she pepper-sprays her own boyfriend. She tells Remy that he is smothering her, and he needs to stop hovering over her. Remy breaks down and admits that he wants to protect her now because at the church he was a coward, and he ducked when the bullets started flying. Valetina comforts him an says that she is glad that he ducked – because she couldn’t imagine losing him.

Carmen is furious when she comes downstairs and sees that Sebastian is showing the house that he gave her to possible buyers. He admits to Carmen that he put the house up on the market because he is broke and he hasn’t made any commission in over a year. Carmen packs her bags and leaves – Sebastian begs her not to go, and explains that he can’t leave his wife because of the prenup. Carmen doesn’t want to hear it, she says that she is “better than this” and marches out of the house with her suitcase.

Michael and Taylor Stepford arrive at the party, Genevieve overhears them bickering over their daughter Katie. Katie arrives at the party and she walks over to a type-writer and cuts her own finger on it. She looks at the blood creepily and smiles to herself. Meanwhile, Michael rushes off and gives a man a sealed envelope and tells him that “tonight is the night.”

Marisol finds Carmen at the party and they share a moment – she apologizes for the way she has been behaving towards her friends and says she got caught up in the glitz of her success. Carmen announces that she finally left Sebastian and now she is homeless. Marisol invites her to move in to her guest room, and Carmen happily accepts her invitation.

Zoila sits down and tells Javier that she is pregnant, before she gets a chance to explain that he is not the father Javier picks her up and starts twirling her around the room and celebrating. Zoila doesn’t have the heart afterwards to tell him that it isn’t his baby. He raves that he is going to be a dad.

Blanca heads to the Stepford house to move her stuff in after the party. Taylor tries to stop her from walking in to the living-room, but Katie is standing there creepily and it looks like a crime scene. The couch is covered in blood, the lamp is broken, and the walls are splattered with blood. The next morning Evelyn heads out in her bath robe to check the mail, she finds a human leg in her flower garden and faints at the sight of it.