Does Kanye West’s New Album ‘So Help Me God’ Cover Include Illuminati Messages?

Kanye West loves being an over-the-top attention seeker, a trait that no doubt drew him to get married to Kim Kardashian in the first place and have a child with her. However, this same trait also gets him into hot water with the press, whom he’s constantly embroiled in a love/hate relationship with, mostly hate mind you.

For example, Kanye just released the name and cover of his new album, ‘So Help Me God’, and there are rumors that the announcement includes Illuminati messaging. The cover is a series of four m shapes connected to each other, and it’s reportedly from the 13th century and is symbolic of the Virgin Mary with occult implications of Illuminati membership. The album cover increased speculation about Illuminati messaging, which Kanye has previously discussed and sung about. 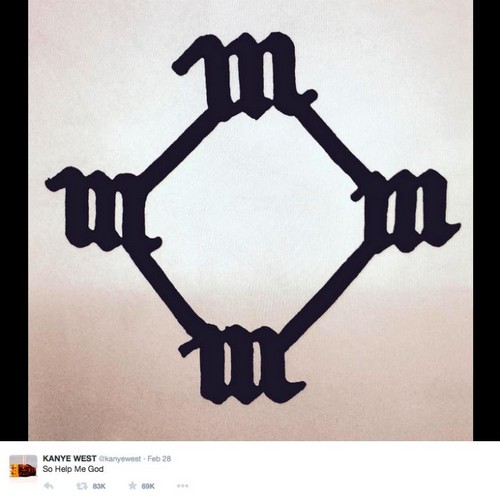 Kanye included the Illuminati symbol on the cover to get more people talking, and his increasing desperation to make this a success is becoming more and more transparent. Even Kanye’s apology to Beck for the Grammy diss was motivated by ‘So Help Me God.’ Kanye West is pulling out all the stops to make sure that ‘So Help Me God’ makes a crapload of money, and that includes releasing album covers that hint at Illuminati messaging – whether he means it or not.

What do you guys think about Kanye’s new album name and cover? Do you think he was just trying to stir up a little publicity with the album cover? Or do you think he just thought it looked cool and didn’t care about the implications?  Of course Kanye West fancies that he is Jesus incarnate so why shouldn’t he be a member of the Illuminati – in fact Kanye probably runs the secret society!