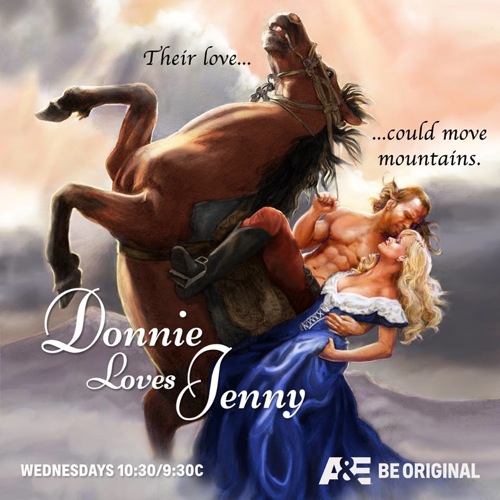 Donnie Loves Jenny airs tonight on A&E with an all new Wednesday January 14, season 1 episode 2 called “Domesticated” and we have your weekly recap below. On tonight’s premiere episode, Jenny McCarthy and her twelve-year-old son, Evan, have always been a team, so when Donnie Wahlberg offers to handle all things Evan for the day, Jenny is weary handing over the reins.

On the last episode, as Donnie and Jenny’s wedding day got closer, Jenny went ahead to Chicago for the final prep while Donnie was stuck with the unusual task of getting her dress there in one piece. Donnie nervously awaited the tour bus arrival of his mom Alma, who doesn’t fly, and prepped a special wedding surprise just for her. Jenny’s son Evan, Donnie’s NKOTB band mates and the rest of their soon to be blended families helped them realize how lucky they are to have a second chance at happily ever after. Did you watch the last episode? If you missed it, we have a full and detailed recap right here for you.

On tonight’s episode as per the A&E synopsis, “Jenny and her twelve-year-old son, Evan, have always been a team, so when Donnie offers to handle all things Evan for the day, Jenny is weary handing over the reins. Donnie tries to juggle his busy TV schedule with his new responsibilities as a stepdad and Jenny tries to trust her new husband with their blended family—but sharing the load might be much more difficult than she imagined”

At their New Jersey house, Lumpy the dog lies on the bed while Jenny sleeps. Donnie tells her she worked late and he’ll take Evan to school. She says he doesn’t know and he tells her he’s been a dad for 21 years and he knows how to be a dad. Jenny says she has Evan’s morning schedule the way he likes it but Donnie says he’s got Evan all day and tells her to stay in bed. She reminds him not to forget his science project then asks if he knows where Evan’s school is.

Donnie starts making breakfast for his stepson with lots of cursing. She says he wants eggs – she’s talking in her half asleep state. She tells him to use sunflower butter not peanut butter. The fire alarm goes off. Donnie goes to wake Evan and says they’re letting his mom sleep in. He goes to check on Evan’s science project and says he knows science since he saw Star Wars. He starts looking for glue then does some MacGuyver stuff with gun.

He has to get Evan up and to school then get to the set of Blue Bloods. He tells Evan that his mom worked late. He gets him dressed and says he couldn’t find glue so he used gum. Evan shows him where the glue is. They’re ready to go and Evan asks what about his hair. Donnie gives him his hat but Evan says he doesn’t like it because it makes him look like Grandpa Macky. He brings a fez he wants Donnie to wear. He does it to make Evan happy.

Jenny says it was great that Donnie volunteered to let her rest and hopes he can manage it. They’re in the car on the way to school and are going over planet names. Donnie asks who named a planet your anus. He finds a great parking spot right in front of the school. He says he’ll be back for lunch then after school to get him. Donnie thinks he’s got it but he forgot the science project. He runs back to get it and is dropping planets on the sidewalk.

The gum isn’t working and he looks like an idiot in the fez. He runs back into the school. Jenny gets up and sees the wreckage of her kitchen. She starts cleaning it up and says she’s conflicted. She wonders if it was stupid to let Donnie do this. She sees he forgot Evan’s lunch and her brain flips out. She says she thinks her kid is starving in Manhattan. She calls Donnie and he says he got him off to school. She says she saw the mess and he says he has to improvise.

He says he was a tropical storm. He says it’s all fine and she says he left the lunch. He says he knows that. Jenny says the one time she forgot the lunch, they called her. Donnie says he’s taking him lunch and she asks to take it to him. Donnie says he already told Evan he will bring him food and asks her to trust him. Jenny is worried she’s going to get crying teacher calls. Macky shows up and she says she let Donnie get Evan ready for school. She tells her dad she’s been praying for help for 12 years.

She says he’s not perfect but Macky says he’s not trying. He tells her to trust that Donnie will get him some food. Jenny calls her dad Master Yoda and says Donnie gets an A for effort. She says she has to chill out and trust him. She says they have nothing in the fridge and asks him to be her wing man to go to the store. They get on bikes to ride to the store. She says it’s good exercise but might crush his balls. She wants to make beer can chicken and calls her mom.

Jenny says she’s not Betty Crocker and doesn’t want to be but says her mom is. She calls her mom and she tells her what all to get. A woman talks up Macky in the store and he flirts with her. She says she thought her dad would help her pick up groceries but he’s trying to pick up women instead. They go to check out and Jenny says it was all good. She says she worked at a grocery store when she was 15 and they had to punch in the numbers and make change in her head.

Donnie gets his lunch break on set and says he has to go take Evan his lunch. He only has 30 minutes and he thought he had an hour. He goes to a deli and gets spaghetti and juice. He says what kid doesn’t love spaghetti. The deli guy says he’s a huge fan of Donnie’s. They take a photo and he heads out. Donnie gets to the school. Jenny has her mom on video chat to help her cook. Jenny makes jokes about being domesticated.

She pops the beer tab and puts it up the chicken butts. She apologizes for violating them. She has them all ready to put on the grill. Jenny has no clue how to light the grill but finally gets it done and says – move over Rachael Ray. She gets her food started but says she probably has salmonella all over her. Donnie goes to pick Evan up from school then to head home. He’s getting a ticket in front of the school at his great parking spot – where there’s a fire hydrant.

He asks the cop to unwrite it and then offers to sing her a song. He blames it on the tree and says he’s innocent. He tells her he plays a cop on TV and his dad is the commissioner. Evan asks to talk to her and begs him not to give him a ticket since he’s innocent. Donnie says he may not have been at his parental best but liked to see Evan step up for him. The woman finally recognizes him but says she still has to give him a ticket. He thanks her and they drive off.

He tells Evan they did it and made it home. He thanks him for letting him drive him today. He tells Evan he had a good time. He says he thinks their bond is growing. They chase each other around the car for a minute and then he hugs him. They head inside as Macky is heading out. He says he’s taking Evan for ice cream. They head out and Donnie gives him a thumbs up. He runs to give Donnie a big hug. He comes in and tells Jenny that they survived and Evan is alive.

She’s all dressed up and has candles. She says she wanted to surprise him for stepping in like this. She shows him the beer can chicken and he says she’s out of her mind. He says he loves her. He says chicken with a beer can up its butt is great. She rips the chicken apart with her hands and he says she eats like a cave man while he uses a knife and fork. He says he didn’t do it for a reward but was happy to have it. She sits on his lap.

She says she’s had to do it alone for so long and says she was scared and every night Evan would ask if they were safe and says Evan feels safe with him. He says Evan is a magical boy and says they’re his life now. She says she wants to rip him apart like that chicken. He asks how much time they have and she says enough time to shove a beer can up his – he stops her. He tells her he wants her to grind him up in a meat grinder, feed him to the dog who will crap him out and then she’ll see his face in it. She says she loves him so much she wants to pull his eyeballs out of his head and put them in ice cube trays.