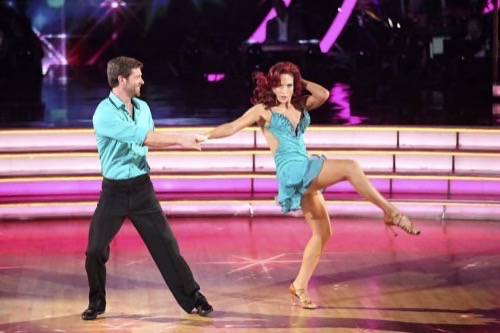 War veteran Noah Galloway and his Dancing With The Stars partner Sharna Burgess are doing amazing on the ABC dancing competition and heading to the semi-finals, but rumor has it that Noah’s personal life could definitely use some improving. Noah Galloway has gushed in interviews about how madly in love he is with his girlfriend Jamie Boyd, but according to a new report Noah has some serious trust issues – and suspects that she may be cheating on him!

The May 18 edition of Star Magazine reveals that Noah was spotted searching through his girlfriend Jamie’s phone to see who she was texting! Star reveals, “A fellow air traveler caught Noah snooping through Jamie’s phone during a layover in Atlanta! In March Noah told us that while his two failed marriages were embarrassing, he has learned from his mistakes.” It sounds like not only did Noah’s previous marriages teach him a few lessons – they also gave him some major trust issues.

According to Star’s eyewitness on the air plane, “Jamie was texting away and Noah seemed a little perturbed. Then, when Jamie dot up to use the ladies’ room, Noah went through her phone. As she returned, he put it back and spoke to her like nothing had happened.” If you ask us – Noah Galloway has nothing to worry about because everyone knows that when you are cheating with someone you never leave your phone lying around, and you always take it to the bathroom with you. But, if he doesn’t start giving his girlfriend Jamie the benefit of the doubt and stop snooping through her stuff – their relationship will be in trouble very soon, because no one likes being treated like a cheater when they are actually being faithful.

Do you think that Noah Galloway is being a little paranoid because of his previous relationships? Or could his girlfriend Jamie Boyd really be cheating on him? Let us know what you think in the comments below!