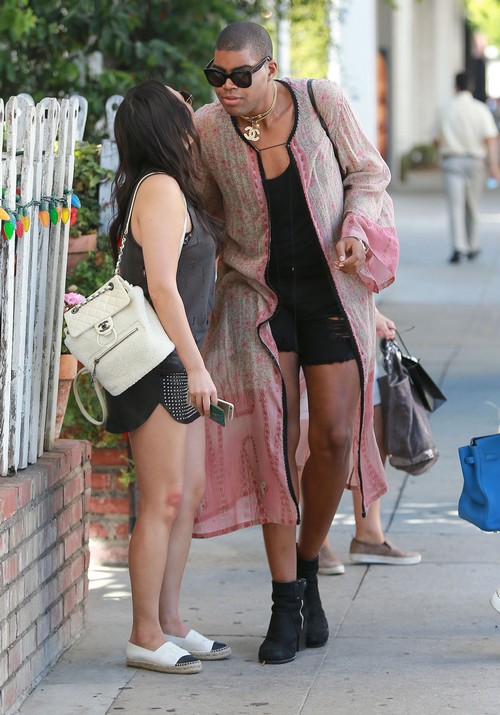 Magic Johnson’s son EJ Johnson might just be the next celebrity to come out as transgender, he appears to be slowly transitioning in to a woman. EJ recently starred on the E! reality TV show “Rich Kids Of Beverly Hills,” and he won over the hearts of trashy reality TV junkies with his hilarious and flamboyant personality. In 2014 EJ underwent gastric bypass surgery and dropped an amazing 180 pounds – since then he is so excited about his new body that he has been wearing dresses around Hollywood to show off his legs.

This week’s edition of National Enquirer reveals that Magic Johnson’s son EJ Johnson has been spotted on more than one occasion dressed in complete drag – high-heeled boots, dresses, make-up and the whole nine yards. Word on the streets of Hollywood is that EJ might just be the next Caitlyn Jenner, and he is loving every second of the attention he has been receiving since he started dressing like a woman.
National Enquirer explains, “EJ has never openly declared a desire to follow in the high-heeled path of

Caitlyn Jenner and become a fully transgendered reality TV star, but he has hinted that he may be prancing down a similar path.” In a recent interview about his amazing weight loss EJ revealed, “The surgery was just a tool. I think it was something that really helped me jump-start the life that I wanted to lead.”

Did you watch EJ Johnson on “Rich Kids Of Beverly Hills?” Do you think there is a chance that he could be following in fellow E! star Caitlyn Jenner’s steps and becoming a woman? Or does he just like wearing dresses? Will his famous NBA father support his decision? Let us know what you think in the comments below!

EJ Johnson spotted out for lunch with a friend at The Ivy in West Hollywood, California on September 2, 2015. EJ has been working hard at losing weight and has lost over 180 pounds. FameFlynet