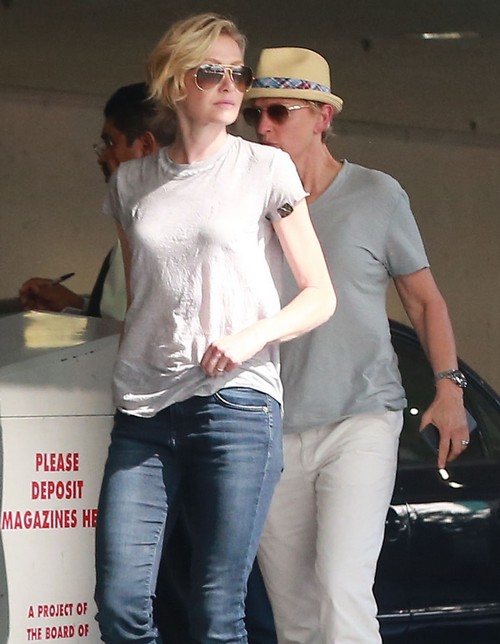 We’ve all heard of prenups, but has anyone here heard of post-nups? Well, according to a new report from Star Magazine, Ellen DeGeneres and Portia de Rossi are getting a ‘post-nuptial agreement’.

This supposed ‘post-nuptial’ agreement would set aside all the boundaries for their marriage, so that they have incentive not to get a divorce. Star’s ‘source’ claims that it would include stipulations about Ellen being ‘career-obsessed’, as well as them taking two weekends away each months and four larger vacations throughout the year.

So basically, this is the same story we’ve been hearing over and over again, just with a slight twist. Ellen DeGeneres and Portia de Rossi are still fighting all the time, but now, they’re making attempts to fix their marriage instead of throwing in the towel completely.

When you think about how much this couple has to lose, it makes sense that they would fight to stay together. They clearly care enough about their image enough to keep addressing the fighting rumors and the divorce rumors, so obviously they’re trying to stay together. Otherwise, they probably would have gotten divorced long before this, especially since sources have leaking divorce rumors left, right, and center.

However, there’s also the fact that in addition to all the money and the property, both of their public images – and to some extent, their careers – are inexorably linked to each other, which means that they have to stay together if they want things to remain the same.

What do you guys think about Ellen’s and Portia’s supposed post-nuptial agreement? Do you think they’re trying to set a new standard for fighting celebrity couples to follow, and will it actually work in keeping them together? Or will they end up getting a divorce anyway, especially if this agreement doesn’t help solve their problems in the long run? Let us know your thoughts in the comments below.