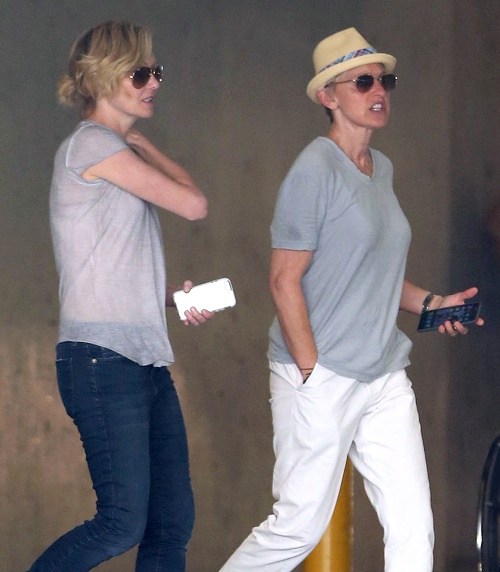 Portia De Rossi is so over Ellen, and women all together – she has a new boyfriend! After months of divorce rumors, Ellen DeGeneres and Portia De Rossi’s marriage is over – a divorce is imminent. Recently, it was revealed that the talk show queen and her wife were living completely separate lives, and Ellen had moved out of the home that they shared and in to her own apartment. As CDL has been reporting for months, Ellen and Portia’s constant fighting, jealousy issues, and Ellen’s temper finally have taken a toll on their relationship.

The April 20 edition of GLOBE Magazine reveals, “Slinky Scandal star Portia has been seen around Tinseltown with a young hunk. Of Course lots of lesbians like to hang out with gay guys. ‘But Portia’s pal sure as heck doesn’t give off gay vibes,’ says the insider. Neither did her first hubby Mel Metcalfe.” It’s no secret that Portia De Rossi desperately wanted to have a baby – and she was devastated last month when Ellen announced on national television that there was so way she was ever having children of her own. So, we’re not exactly shocked that Portia has opted to switch teams again and began dating men – if Ellen didn’t want to go to fertility clinics with her or consider hiring a surrogate, then it looks like Portia is going to try to have a baby the old-fashioned way, with a man!

According to GLOBE Magazine’s insiders, Ellen is not taking the break-up well. An insider dished to the magazine, “Ellen is reeling. Her whole world seems to be falling apart.” And, for good reason. This is not the first time that Ellen has lost a girlfriend to a man, her previous flame Anne Heche left her and got pregnant and married Coley Laffoon.

We all see Ellen and Portia’s break-up and divorce coming a mile away. The talk show queen had to know it was imminent as well. It’s just the extra slap in the face that Portia left her for a man that she is most likely not coping with well. Are you shocked that Portia is dating men again? Do you think if Ellen agreed to have a baby with her that they would still be together? Let us know what you think in the comments below!