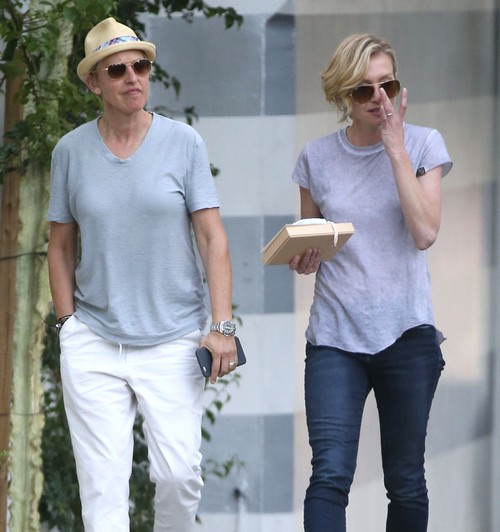 Ellen DeGeneres and her wife of 7 years Portia de Rossi are on the fast track to a divorce, and are now living in separate houses! Divorce rumors have followed the couple for years, but earlier in 2015 Ellen and Portia were supposedly going to couple’s counseling and planning on renewing their wedding vows. Apparently those plans fell through, and now Ellen and Portia’s marriage is in even more trouble than before – the two women are living separate lives!

An insider dished in this week’s edition of In Touch Magazine, “Things have been rocky for a while but they hit an all time low after a fight they recently had over Ellen’s obsession with plastic surgery. Ellen ended up leaving and is staying in a condo in Beverly Hills, Portia is living in their estate in LA.” Ellen’s talk show is on hiatus for the summer, and she has promised Portia that they would spend the break working on their marriage and renewing their wedding vows. However, Ellen had a change of heart and decided that getting eye-lid surgery was more important than their relationship – and Portia freaked out.

Seriously, is there anything that Ellen and Portia can agree on? It seems like the two women have basically spent their entire 7 year marriage fighting like cats and dogs. They must be growing tired of the drama, because we are all growing tired of hearing about it. If Ellen chose plastic surgery over wedding vows and counselling, it is safe to say that she checked out of their relationship quite a while ago. Divorce seems like the only feasible possibility at this point, seeing as how they are already living in separate houses.

What do you think? Should Ellen and Portia throw in the towel? Or could they still work things out and avoid a divorce? Let us know what you think in the comments below!