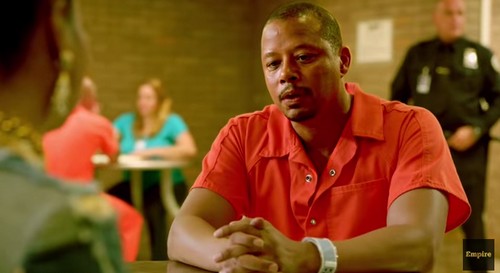 “Empire” Season 2 spoilers tease that Cookie Lyon (Taraji P. Henson) and the rest of the cast will be back on primetime in just a few short weeks. The Season 2 premiere of “Empire” will air on FOX on Wednesday September 23 – and we seriously can’t contain our excitement. If the all new promo video for Season 2 is any indication, Empire fans are in for a huge treat and some must-see drama. If you missed the Season 1 finale you can catch up right here with our thorough recap.

According to “Empire” spoilers, the Season 2 premiere will kick off with Lucious Lyon (Terrence Howard) behind bars, and it looks like Cookie is handling business while he is away. We hate not having Lucious at the forefront of the drama, but we also love “Orange Is The New Black” – so it could all work out in the end. The all new promo video for the FOX drama teases that Howard’s character will have his own drama to deal with inside the prison. And, there is even a pretty intense scene where Cookie Lyon goes to visit him. In the “Empire” spoiler video Lucious confesses to Cookie, “It is crazy how I can love you and hate you at the same moment.”

The all new “Empire” spoiler video also features a first sneak peek at Oscar Winner Marisa Tomei in her new role. Tomei will be playing the role of Mimi Whiteman, a venture capitalist that somehow gets caught up in some messy business dealings with Cookie Lyon. According to “Empire” spoilers, Mimi “loves beautiful women” – rumors on the Internet are hinting that there may be some sex scenes between Mimi and Cookie in Season 2.

The Season 2 cast of Empire is impressive, and Marisa Tomei is not the only big name joining the roster. Spoilers tease there will also be appearances by Pitbull, Chris Rock, Lenny Kravitz, Ludacris, and Alicia Keys. Rumors have been teasing that Mariah Carey might also be popping up during Season 2, however no one from cast has confirmed or denied it.

Are you as excited as we are for Season 2 or Empire? Do you think Taraji P. Henson and Marisa Tomei could wind up hooking up on the drama? How long will Lucious be in prison? Let us know what you think in the comments below and don’t forget to check CDL for all of your “Empire” Season 2 spoilers and recaps.