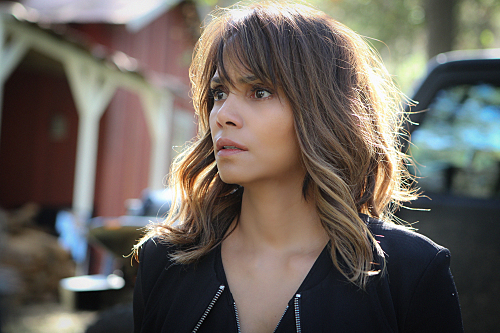 Tonight on CBS Steven Spielberg’s Extant starring Halle Berry returns with an all new Wednesday July 22, Season 2 episode 4 called, “Cracking the Code.” We’ve got your recap down below! On tonight’s episode Molly tries creating a virus to destroy alien hybrids and discovers that aliens are trying to communicate with humans through a hidden message in their DNA.

On the last episode Molly finally learned the frightening truth about what happened to her son. Also, Julie’s decision to erase Ethan’s memory had disturbing consequences. Did you watch the last episode? If you missed it we have a full and detailed recap, right here for you.

On tonight’s episode per the CBS synopsis “Molly tries creating a virus to destroy alien hybrids and discovers that aliens are trying to communicate with humans through a hidden message in their DNA. Elsewhere, Lucy helps Ethan run away from Charlie to help him recover memories of Molly.”

Apparently, they’ve all learned things the hard way since this whole alien invasion part two began and, once he saw for himself what the “Offspring” could do, Molly’s general friend knew he couldn’t take the chance of walking into Molly’s home unarmed.

Toby’s has been hunting Molly’s son ever since he shed his exoskeleton back at the morgue. So he’s seen Ahdu kill and when Ahdu has made other people kill for him. And that’s why he arrived at Molly’s home prepared for a fight. But ended up surviving two gunshot wounds to the chest.

Molly claimed her son had warped her perception like he was known to do. Yet Toby’s second-in-command and girlfriend felt like maybe Molly wasn’t being truthful with them. See she seems to believe that Molly is in fact working with the aliens and could have shot Toby of her own volition.

So Molly has a tail on her and to be frank it doesn’t look good for her to be so mentally unstable. And she is without a doubt unstable.

Molly has been hearing things and sometimes she gets blank spots in her memory when she randomly goes off with strange men. And, well, only two things could have caused that. Either she received radiation poisoning while she was up in space or it could be that the spores had some leftover effect on her psyche.

But whatever it is, Molly is keeping it secret and doing her best to hide her symptoms.

And the only problem with that is that is the many people that are currently relying on Molly. Toby still seems to trust her despite the shooting. So he put her on the virus committee otherwise known as a team of doctors that are intent on building a virus that will aliens but leave humans completely unharmed.

Now that team of doctors want to stop a potential alien invasion. Though while they still haven’t reached their goal, the government had to find a way to stop all the births. Thus a public announcement was made about a deadly virus targeting women that have become pregnant in the last three months.

So these women arrived at the special designated clinics hoping to get screened and they either return home or are forcibly taken into custody. And, fortunately, JD was quick to see what was going on before his daughter went to go get herself checked out.

JD ended up calling Molly later for a favor. He asked her to test his daughter for the “virus” without anyone else finding out. And Molly agreed to do this for him on the sly.

But his daughter on the other hand was ungrateful. She found out that Molly had been in the loony bin so she wanted to get herself checked out by a proper doctor. You know like the ones down at the clinics. So she then chose to ignore her father’s dire warnings and go to the hospital on her own.

The young lady turned out to have a normal pregnancy. And she also saw for herself how weird things were down at the clinic.

So JD did get his daughter back but it was a close call. And by doing secret tests for him, Molly was asked to take a leave of absence from the virus team. It seems they thought she was messing around with data and even when she did find something to help them – no one wanted to listen to the questionable Molly Woods.

Her hold on reality was slipping and, though JD promise to help, that didn’t stop Molly from having outburst. And now that Ethan has found out about Julie erasing his memories – he’ll most likely go down with his real mother as she continues to spiral out.

However the new humanic, Lucy, is just another threat everyone we’ve come to know will ultimately have to face.

The machine that only looks human had to learn everything from a program instead of receiving a traditional education like Ethan. See she didn’t learn right from wrong by being raised by loving parents. Everything she knows are just facts to her and nothing else.

So do you what that did to her? It lowered her overall morality until she kill without second thought and in her spare time she read Machiavelli’s The Prince as an instructional. Meaning this humanic that’s supposed to save the world from hybrids is scheming, militarily inclined, and oddly she’s learned how to manipulate Charlie into doing anything she wants. And will thereby be a bigger than any of the hybrids.