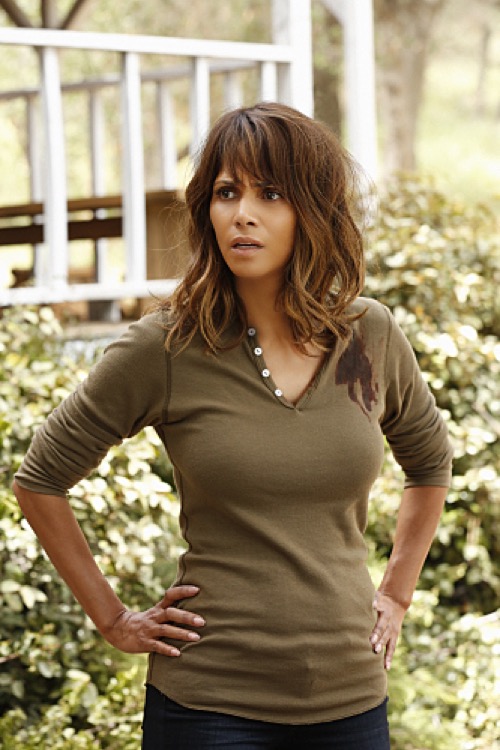 Tonight on CBS Steven Spielberg’s Extant starring Halle Berry returns with an all new Wednesday August 12, Season 2 episode 8 called, “Arms and the Humanich.” We’ve got your recap down below! On tonight’s episode Molly [Halle Berry] tries to save her son [Pierce Gagnon] following a raid on the hybrid compound and JD tries to rescue his daughter from Shepherd. [David Morrissey] Elsewhere, Lucy [Kiersey Clemons] becomes a bigger threat to humans.

On the last episode Molly panics when she discovered he was changing physically – the question was into what, and whether she could reverse what’s happening to her. Also, JD’s ex-wife, Dorothy (Melina Kanakaredes), showed up suddenly on his doorstep to discuss their daughter. Kanakaredes guest starred as Dorothy, the ex-wife of JD Richter, a tightly wound, by-the-book circuit court judge. Did you watch the last episode? If you missed it we have a full and detailed recap, right here for you.

On tonight’s episode per the CBS synopsis “after a Global Security Commission raid on the hybrid compound, Molly desperately tries to save her son Adhu, while JD attempts to rescue his daughter who is being held captive by Shepherd. Meanwhile, Lucy becomes more of a threat to humans.”

[Molly was still with her “family” when the army of Humanics arrived and unfortunately some willing chose not to listen to her when she said they should hide in the tunnel rather than fight. So tonight’s episode of “Extant” was a blood bath.

Unfortunately, some of the hybrids thought they could stay and fight. As they had thought they could easily win against inferior humans. But they hadn’t counted on Humanics and Molly didn’t remember Ethan telling her about his soldier of a sister until it was too late.

So on day one of the conflict, there were a great many of hybrids that were simply slaughtered. And Molly would have eventually joined their numbers if it hadn’t been for JD. JD had turned back for her at just the right time. And he was the one that had shot Lucy in order to protect Molly.

Yet Lucy left that part out when she had been returned to the lab for recovery. See she told Ethan that it was actually his mother that had shot her. And that played into everything she had taught Ethan. Like humans can’t be trusted for instance.

And so Ethan was on the warpath. He hated that Humanics weren’t allowed to hurt humans but that humans were allowed to hurt Humanics. And later he told Julie that if she ever did something like Molly did to Lucy – he wouldn’t know what he’d do. Almost as if Ethan was issuing a threat.

So maybe people should have told Ethan the truth.

If nothing else they should have told him what Lucy was hunting and how she was helping poison an entire race simply because they weren’t human. And poor Ethan, he doesn’t know how much Lucy is playing on his emotions. For Molly didn’t even target her. She merely stood in front of her granddaughter and took a bullet that was meant for a child.

Then, after they had escaped the massacre, Molly and Ahdu had went back to JD’s ranch and ended up having a run-in with his ex-wife. Dorothy had apparently come looking for her ex when the GSC took their daughter into custody.

Dorothy is a smart woman and she knows her ex-husband isn’t a terrorist. So she demanded to know what was going on and that JD get her her daughter back. But it seems Dorothy wasn’t ready for the truth because once she found out about aliens – she pulled a gun.

Molly was able to disarm the other woman but it was still odd of them to leave Dorothy in charge of a sick Ahdu while she and JD left to go get a cure and his daughter back.

JD’s plan had been to turn himself over to the GSC in exchange for the release of his daughter. However Toby is not going to stop at only him. He also wants Molly in custody and, while he was busy questioning JD, she was off stealing medical equipment from GSC in order to create a cure for the virus they hit her son with.

So JD wrapped things up nicely for his friend. He told Toby that the air strike had killed her. She had gotten infected and really wasn’t that what the general wanted all along.

But Toby tried to explain his actions. For he didn’t believe he ordered an extinction simply on something he couldn’t understand. He just thought he was acting for the greater good.

And his eyes weren’t open until he saw for himself how sick Molly was.

The plan had worked. JD’s daughter was released. Yet, by time Molly had gotten her hands on the equipment, it was too late. Her son had rapidly aged in the time that she had been gone and he was an elderly man when Molly had gotten back. So all she could do was make her son’s final moments peaceful.

Then, once he was gone, Molly didn’t have anything left. Nor did she have a reason to stay around only die when she had a better chance at surviving if she turned herself in.

Though in the war on hybrids, a bigger issue did come up. Lucy was created for the sole purpose of being a soldier but since her creation she’s taken her programming to whole new level. And it was as Lucy had been getting fixed (JD did shoot her pretty good) that she finally decided to show her true colors.

Lucy demanded that Charlie remove her expiration and if he didn’t then she was going to use the footage of them making out on top of him failing to install her limiters – against him. So in the end Lucy’s problem was that she was too human. She knew how manipulate and connive to her heart’s content.

And, oh, she would have gotten away with it if Charlie didn’t then tell Julie everything.

He told Julie where he went wrong and luckily she didn’t hold his actions against him. Instead she decided to help fix their problem. And turn Lucy off for good.

However before she could do so, Ethan ended up finding out about their plan to shut down Lucy so he warned her beforehand. And that meant she was prepared when Julie walked into the lab alone. Charlie had been trying to explain to Ethan how they were both good humanics and Bad Humanics so neither of them where there when Lucy made her move.

The Humanic attacked Julie when she wasn’t looking and came close to snapping her neck when the guys returned and Ethan ripped out her hard drive.

Ethan it seems wasn’t going to condone murder but now he doesn’t know what to make of his own actions.